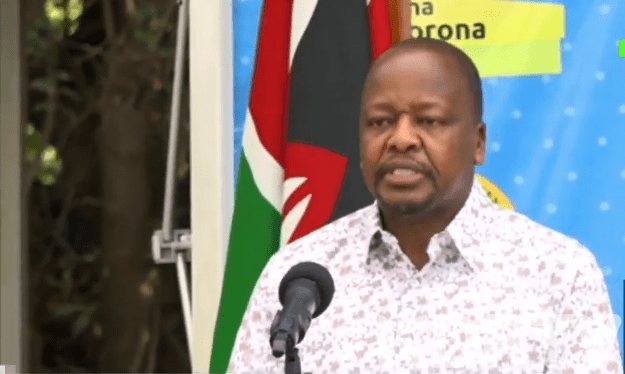 The new cases which were reported after 2833 samples were tested in the last 24 hours raise the total number of infections in the country  to 2767.

The new patients include 159 Kenyans and 8 nationals; among them foreigners are Eritreans and a South Sudanese national

During a presser on Sunday, the Health Cabinet Secretary Mutahi Kagwe said that the ages of the new patients ranges from 11 months to 75 years

However, in his statement, Matahi Kagwe announced that 46 more COVID-19 patients have been discharged from the hospital after recovering from the respiratory disease caused by coronavirus, bringing the total number of recoveries to 752.

Unfortunately, one more patient succumbed to the diseases raising the total number of fatalities to 84.

The highest number in the country was recorded a day after the President announced that the previous dusk-to-dawn curfew will be now starting at 9 p.m and ending at 4 a.m.

The government also announced that schools will be reopened on September 1, 2020.

The government is also still preparing report on when the places of worship will be opened amid continued fears of coronavirus.

The neighboring country Tanzania had reopened secondary schools and tertiary learning institutions after President Magufuli announced that the country had healed from coronavirus.

According to our previous reports, India had also opened their flights but retreated after the rate of infections escalated again.