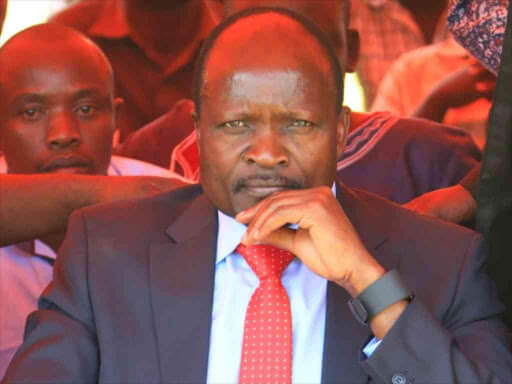 Officials say the governor and his children were arrested as they presented themselves to the Ethics and Corruption Commission (EACC) regional offices in Kisii town.

EACC had summoned Obado to appear before the offices on Tuesday evening following a statement from the Office of the Director of Public Prosecutitions (ODPP) which preferred charges against the governor, his four children and a host of businessmen in Migori County for corruption.

Obado is accused of swindling the county government of more that Ksh 73m through proxies.

“The investigations were in respect of Sh73.4 million being sums indirectly received by the governor Migori county through his children who received multiple payments from companies trading with the Migori county government between 2013-2017,” Haji said in a statement on Tuesday evening.

DPP Noordin Haji gives a go a head for the prosecution of Migori Governor Zachary Okoth Obado in relation to embezzlement of Kshs. 73.4 million belonging to the county.#AntiCorruption_ODPP pic.twitter.com/e1bgH18Twi

The Governor gave contract tenders to his friend named as Jared Kwaga, who upon receiving money sent it to Obado’s children. A total of Ksh 38.9m was wired to Obado’s to the accounts of three children abroad.

The three; Achola Dan Okoth, Susan Scarlet Okoth and Jerry Zachary Okoth will now be charged alongside their father.

The Governor’s other daughter Everlyne Okoth is said to be collecting rent from a lucrative building in Nairobi’s Loresho Estate. The Ksh 35m property was purchased by Kwaga.

The Governor and his children are facing charges of; conspiracy to commit an offense of corruption, conflict of interest, money laundering and unlawful acquisition of public property.

The Governor is likely to be locked out of his office as the case starts in earnest.

This is a new low for Obado, who is also facing murder charges in court. Obado is accused of killing his pregnant girlfried Sharon Otieno in 2018.

PRESS RELEASE: Inquiry into allegations of misappropriation of public funds by the Governor, County Government of Migori, Zachary Okoth Obado through designated proxies and employees of the County Government. pic.twitter.com/db7wa9UYuF

At the time, the governor called for a press conference in Nairobi in which he paraded his family as he denied reports linking him to Sharon’s murder. It seems like he has succeeded in dragging the entire family down with him.