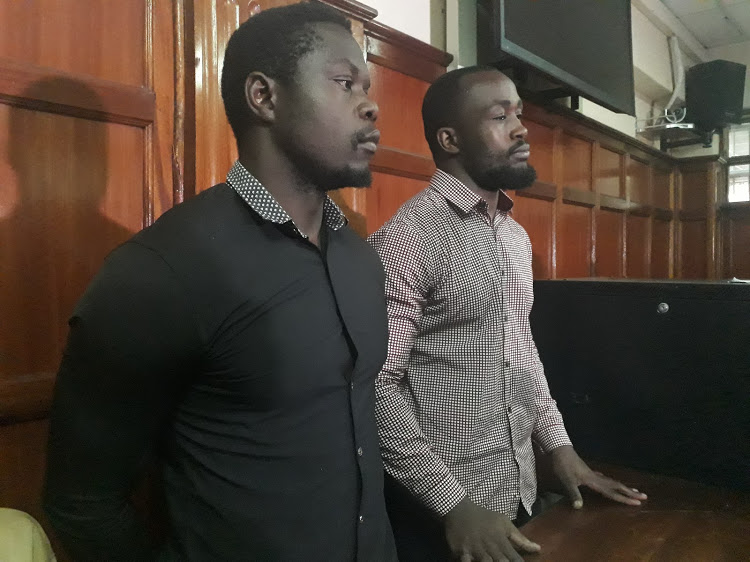 Alex Olaba and Frank Wanyama the renowned rugby players have been sentenced to 15 years in jail after found guilty of rape charges.

The Milimani Court Magistrate Martha Mutuku served the two with the minimum sentence of their offense, which is 15 years.

“Looking at all the evidence provided, a custodial sentence is appropriate. You are therefore to serve 15 years in jail for the offence committed,” said Magistrate Mutuku.

Wanyama and Obala were found guilty last week on Thursdays, with the judge postponing the sentencing to a later date.

The had lured a woman into one of their apartments after a night out of drinks where they consecutively raped her until she was unconscious.

The case created a social media buzz where the two pledged their innocence claiming that the actions of that night were consensual and maturely planned.

Things took a new twist after the victim who is an artist turned out pregnant with DNA tests revealing the truth in her confessions.

These two are very prominent rugby players who have built their careers and established them by alternating in different teams and representing the country internationally.

Part of their defense detailed their careers and contribution to the society, arguing that jailing them would subject their lives and loved ones into a difficult life.

Ideally, the two had initially signed big deals with the rugby team to elevate and highlight their careers more.

However, this is all in vain as they are now going to serve 15 years in prison, putting their career, social life and family aside.

Rape is a very serious offense in Kenya and although many cases have gone unjustified, this is celebratory to the rape victims as justice has been served.