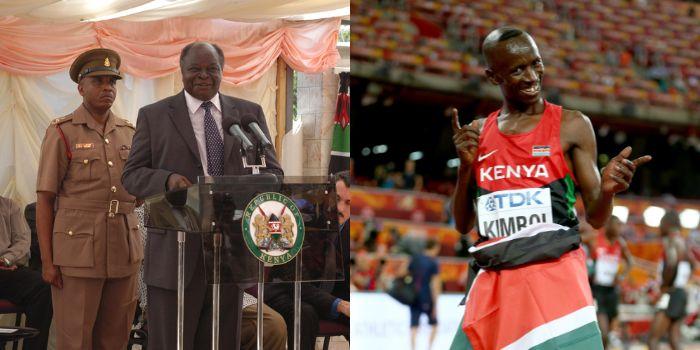 The late President Mwai Kibaki in January 2013 declined to take a golden medal from marathoner Ezekiel Kemboi which he had won at the London Olympics.

Kibaki was grateful for the gesture, but he turned down the particular present. He stood up and motioned for Kemboi to take back the medal.

“Can the generous man who gave me this beautiful medal please come forward. Have it back, you deserve it, thank you very much,” Kibaki said.

Kemboi, on the other hand, argued that Kibaki earned the award for encouraging sport throughout his presidency.

“He can have that; I still have the one from Athens and many other medals. I decided to give him the medal and dedicate it to him as the Head of State. Others dedicate them to their mothers, fathers and family.

“I chose to dedicate mine to him and the country since he has done a lot for sports since he took power,” Kemboi remarked.

Despite the fact that the former president did not accept the gold medal, Kemboi was able to give him an autographed portrait of himself performing his famous victory dance, “Emily Chepchumba.”

It is against the rules of the International Olympic Committee to transfer one’s Olympic medals to another person.

Subscribe to watch latests videos
In this article:Headlines, Mwai Kibaki