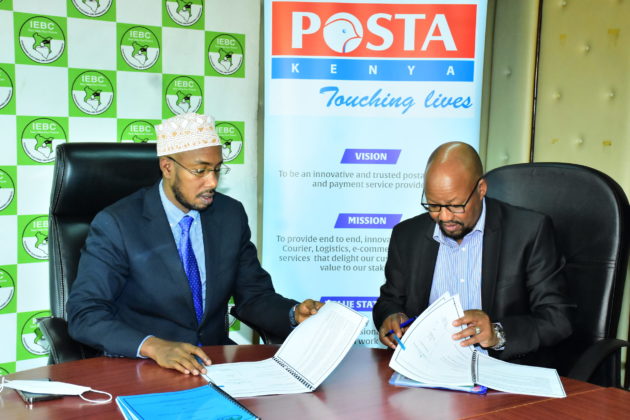 The Independent Electoral and Boundaries Commission (IEBC) and the Postal Corporation of Kenya (PCK) have inked a Sh700 million deal under which PCK would supply logistics services for the upcoming 2022 General Election.

PCK will also be responsible for transporting election materials throughout the country to designated IEBC offices, warehouses, polling centers, and other stakeholders according to the deal.

During the signing on Monday, IEBC CEO Marjan Hussein Marjan stated that Posta would be the logistical partner for the 2022 General Election.

“Efficient logistics services were key to a credible electoral process,”

“IEBC will use PCK’s services should it require conveyance of election materials from one location to another.” he stated.

PCK CEO Dan Kagwe, for his part, stated that the company would “implement a tracking mechanism that tells IEBC inspectors of the condition of the materials at any moment.”

According to Kagwe, Posta now operates a customer web-based portal that enables for the capture of material details from the point of collection to the point of delivery.

Posta will also be required to maintain secrecy when handling IEBC materials and any other related information while in PCK possession, in order to protect the security and credibility of processes.

PCK earned Sh1.1 billion during the 2017 General Election for logistics services provided to the IEBC in both the August 8th General Election and the October 26 repeat presidential election.