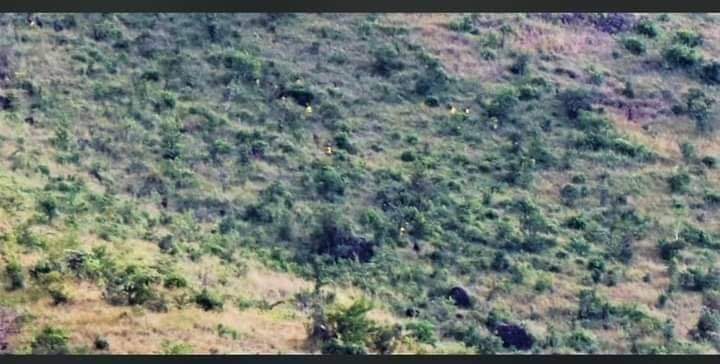 (KDRTV) – Business was brought to a standstill in a Ugandan town on Wednesday after more than 200 inmates broke out of prison.

In what can only be described as a scene from an action movie, the jailbirds are said to have taken over their uniforms to avoid detection and fled naked to the nearby hills.

The incident happened at Singila Prisons, in Moroto, a town in North-Eastern Uganda. The escape was made easier by the fact that the prison is located on the foothills of Mt Moroto, the escapees just dashed into the mountains.

Picture of the prisoners in yellow ascending to Mt Moroto. #UgPrisonBreak pic.twitter.com/bloEA2I6CN

According to officials, the hardcore criminals overpowered prison wardens and accessed the armory which had about 15 rifles. They grabbed the guns and ran towards Mt Moroto.

Over 200 prisoners have escaped from a facility in #Uganda’s north-eastern town of Moroto town. The inmates are said to have made off with 15 guns and several magazines.

Locals said a heavy shootout ensued between the escapees, whose number is estimated to be 219, and Ugandan soldiers. At least one soldier was fatally shot in the melee.

While confirming the incident, the Uganda People’s Defence Forces (UPDF) said the operation to rearrest the escapees was ongoing.

“The operation by UPDF in pursuit of escapees from Singila prison in Moroto to rearrest them and recover the stolen guns continues. The population, therefore, is advised to stay calm,” a statement from UPDF said.

The operation by UPDF in pursuit of escapees from singila prison in moroto to re arrest them and recover the stolen guns continues.the population therefore is advised to stay calm. pic.twitter.com/eUu6KpH6x9

The incident happened at around 4;30 PM. Authorities say three inmates had been recaptured while one was killed.