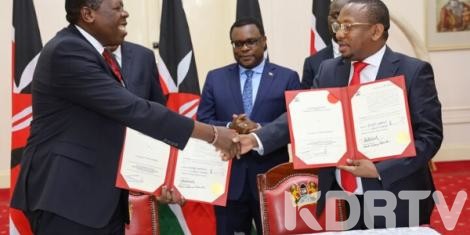 (KDRTV) – Devolution CS Eugene Wamalwa is at the centre of the deal that saw embattled Nairobi Governor Mike Sonko cede some of his powers to the national government.

Does this mean, Wamalwa will take over the running of Nairobi? Technically, that is the case.

As the Devolution CS, Wamalwa is charged with ensuring that all counties run smoothly.

Nairobians should expect to see the CS more times than it was before.

Interestingly, Eugene was touted as one of the possible Nairobi gubernatorial candidates in the run-up to the 2017 elections.

He had formed a pact with former Starehe MP Bishop Margaret Wanjiru who was to be his running mate.

However, Eugene bow out of the race in 2016 after allegedly falling out with a section of Jubilee MPs.

Most Nairobi politicians considered him an outsider in city politics, having previously been Saboti MP in Trans Nzoia.

This gave Mike Sonko to battle it out with former Gatanga MP Peter Kenneth for the Jubilee ticket. Sonko beat Gatanga hands down before going to wrestle the city from Evans Kidero.

Wamalwa has a chance to show Nairobi people what he can do before 2022. That is if Nairobi will still be a county.