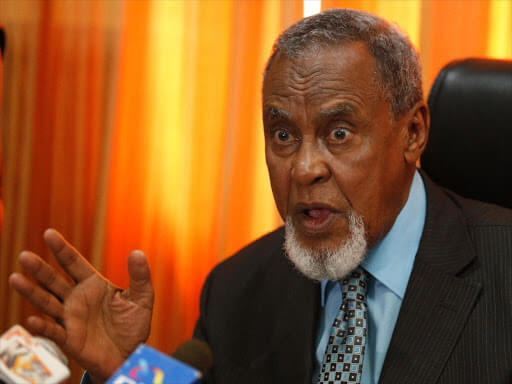 (KDRTV)- Garissa Senator Yusuf Haji died at the Aga Khan hospital in Nairobi on Monday morning after a long illness, reports from the family confirmed.

Yusuf was Sartuday flown from Turkey, where he had been receiving medication.

Reports from a family spokesperson revealed that Haji had multiple body organ failure.

He had a heap injury in his house before he was admitted to hospital last year.

Since then, he had been a frequent visitor to hospitals.

Yusuf has served as the chairman of the Building Bridges Initiative (BBI) taskforce.

He also served as a cabinet Minister of Defence from 2008 o 2013 during the grand coalition government of retired President Mwai Kibaki and former Premier Raila Odinga.

He also served as Minister of Internal Security and Provincial Affairs in 2012 but for a short period.

He has been serving as Senator of Garissa from 2013 until his demise.

His Janaza prayers are scheduled for Monday at 4.00 pm in South C Mosque, and thereafter his burial will be done at the Lang`ata Muslim Cemetery.