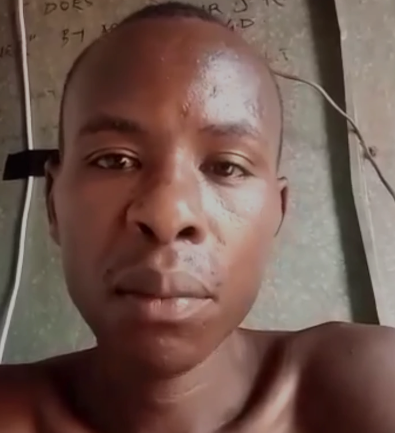 A video of a police officer allegedly battling depression has gone viral following his plea for help before he commits suicide.

The video, believed to be from a police officer going by the name Kiprot Chirop, reveals the sad situation the young police in Marsabit is currently in.

Kiprot goes ahead to share how he has been suffering from depression and has tried committing suicide several times because of lack of help.

“I’ve tried to kill myself several times now because no one wants to help me,” said the cop in the video.

“I’m really really depressed. I’m requesting everyone ready to help me fight this depression I will thank you. Everybody who will come to my rescue.”

Kiprot said that he has had several suicidal thoughts and asked Kenyans to help him because he doesn’t want to die and leave his young family behind.

READ ALSO: Opinion: I Attended Raila’s Mt Kenya Foundation Meeting As A Fence-Sitter And Made These Observations

“My wife is pregnant and I don’t want to leave them behind. Please help me. I’m suffering a lot and I’ve not slept for the last five days. Please help me and I’m ready to be helped.”

The video comes after several depression cases from police officers which have turned out to be disastrous in the end.

Police officers are suffering in silence as the majority have been affected mentally by their work. Some have been dying just because of depression and family matters.

Speaking mid this year, Deputy Inspector General of Police Edward Mbugua called for a holistic approach in addressing officers’ welfare at a time the country is witnessing a surge in cases of suicide and murders within the service.

“We are addressing the symptoms and not the root cause of why these officers are going through depression. In the last 20 to 25 years, we never needed counsellors to counsel these officers,” Mbugua said.