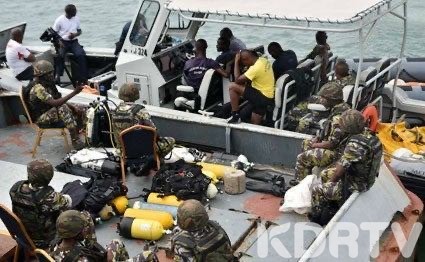 The possibilities of retrieving the car that plunged into the ocean Indian Ocean with mother and baby on board might have bore fruits as the vehicle location has been found.

Through the Government Spokesperson Cyrus Oguna, there are 90 percent chances that the located vehicle might be the one that has been o after for close to 11 days.

Oguna narrated that the possible locations had been narrowed down to two with depths of 58 meters with the car bearing possible resemblance to the one that had plunged during the tragedy although it was spotted upside down.

“We cannot confirm with certainty that the vehicle we spotted was the one that plunged into the Indian Ocean,” Oguna said, adding that they needed to check the number plate.

This information was communicated through the divers who passed the message that the vehicle with similar resemblance had been spotted, with the Government Spokes person adding that there were still more processes to be undertaken before there was utmost certainty.

Ideally, this comes as a relief to the family who have been in distress for more than one week, and the public who had pledged to boycott tomorrow’s Madaraka Day celebrations until the bodies of the other, Miriam aged 35 and her daughter Amanda aged 4 were retrieved.

The Government Spokesperson, Oguna, appraised the search teams that had been deployed in the area to orchestrate the operation and applauded their commitment together with passion to resolve the issue.

READ ALSO: I am Sorry, Swedish Diver Apologizes To Kenyans After Failing To recover Likoni Bodies

A multi-agency team comprising the Kenya Navy, Kenya Ferry Services, Kenya Ports Authority and Kenya Maritime Authority, among others have been leading the recovery enjoined by private divers hired by the family.

While addressing the press during a media briefing, Oguna stated that they had only seen 'something that looked like a car', and unlike what journalists reported to have witnessed on live TV, no vehicle had been retrieved from the waters. https://t.co/pssvB80WMJ

“I want to thank the family for their patience. We have been providing counseling services to the family all along.” he said.

Oguna explained that there were high hopes of identifying the exact identifications of the vehicle and possibly a recovery mission would be started by early tomorrow to have the case closed.