The East African community is reeling from shock after a very sad incident happened during a burial ceremony in Uganda.

The burial ceremony which took place on Sunday, April 11, saw mourners turn on the dead and institute yet another punishment.

According to Monitor Uganda, the burial was for a man named Amos Mugume who allegedly met his death after being shot by security forces who had been on his trail on Friday, April 9. 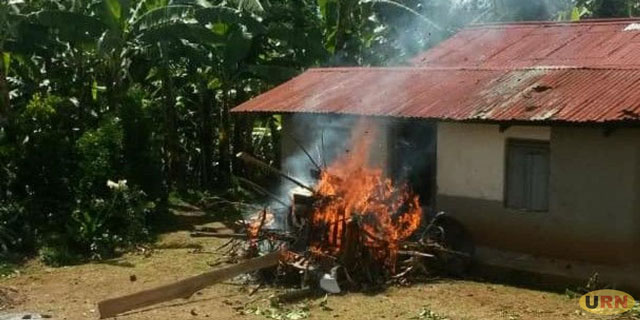 The deceased is said to have cut one Mr Patrick Kyomuhendo who had caught him stealing items from a neighbour’s house.

Mugume actually used a machete on Kyomuhendo’s chest, legs and also sliced off two of his fingers.

All was well and burial arrangements were going as planned until when the body of the deceased arrived home on Sunday, ready for the burial.

Monitor Uganda reported that a sharp disagreement erupted between Mugume’s mother, Ms Pricilla Friday and one of her sons and mourners who were on one side.

This publication has learnt the mother wanted the casket containing the remains of Mugume moved into the house before burial, but one of her sons and mourners objected, arguing that the late Mugume was a criminal and kidnapper undeserving of a decent burial.

The deceased mother and some relatives managed to move the body into the house where they locked the doors and relocated the corpse to another room after removing it from the coffin. 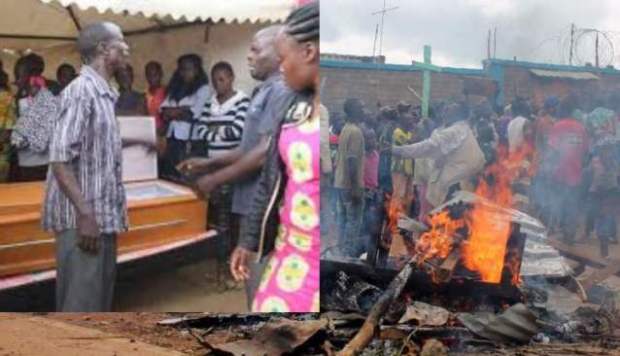 However, the angry brother was already in the house and he launched a bitter quarrel.

A fight broke out between the brother and other relatives in a move that attracted the attention of mourners who broke the door while forcing their way in.

They first broke the casket into pieces and used the wooden pieces to set fire.

The turn of events was confirmed by a Ugandan journalist David Bukenya who said;

“When the body was taken inside the house, because there was disagreement between the mother and her son, the mother decided to close the door and mourners were left outside which angered them and they started demanding the deceased body to be buried immediately,”

The angry mourners are said to have overpowered and forced Ms Friday and her associates to flee.

It was then when they removed the body of Mugume and dumped it in the compound.

They then piled wood on it and got fuel from nearby boda boda operators and set the corpse on fire.