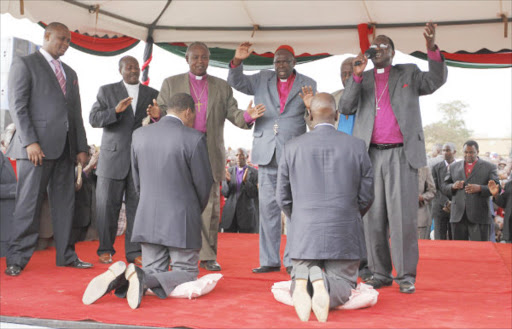 The Kenya Conference of Catholic Bishops has hit a dead-end in its efforts to reconciling President Uhuru Kenyatta and William Ruto.

It was been established that a team of bishops led by retired African Inland Church [AIC] Archbishop Muheria met with the two politicians to help them reconcile saying that their feud is threatening the country’s peace and tranquillity.

Sources involved in the meeting have now revealed that they have hit a dead-end as the two are not ready to reconcile and work together.

It has been established that DP Ruto accused President Uhuru of shortchanging him on their 2013 deal as well as failure for the Head of State to acknowledge the role he[Ruto] played during Uhuru’s race to State House.

The sources have also intimated that President Uhuru expressed his disappointment with his Deputy’s claim to a “shared presidency” including exploiting the 2010 Constitution that gives him immunity from being sacked, to allegedly disrespect the Head of State.

According to the source, these two reasons might be why the heads are not ready to work together despite the economy falling apart.

“Theirs is a problem that seems to have begun simmering almost six years ago before it erupted publicly in 2018. The differences have to do with something much bigger than what we know,” said the source as quoted by People Daily.

A 23-member conference held on Wednesday by the church leaders stated that the open disagreement between the two has now transferred to the ground between their followers.

“In a young democracy like ours, it is important that there is unity among the top leaders as this gives confidence to the people,” the Bishops said during the conference.

“As Church leaders we are ready to step in and mediate a working arrangement between the two leaders that our Country badly needs as provided by the Constitution,” the Bishops added.