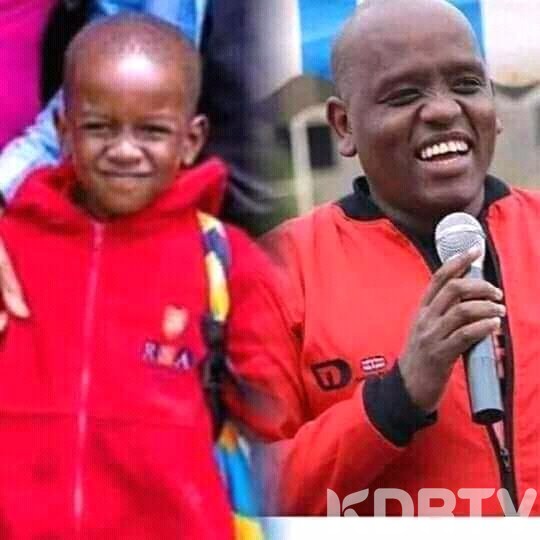 Former Citizen TV Journalist Jacque Maribe might have confirmed that comedian Eric Omondi is the father of her son Zahari but a section of Kenyans are not convinced and have claimed Dennis Itumbi could be the real father.

Maribe, who was fired from Citizen after visiting Itumbi while in police custody, announced on Thursday that it Eric Omondi is her baby daddy. There have been rumours that the two had a thing going on at the time she had her baby.

“Family first. Happy graduation day Zahari. We, mum and dad @ericomondi are proud of you!” she captioned a picture of the three of them in an Instagram post.

Family first. Happy graduation day Zahari. We are proud of you!!

But several Kenyans are claiming the baby whose face was shared on social media for the very first time looks like Tanga Tanga blogger Dennis Itumbi. Itumbi and Maribe are very close friends.

Lakini when you get close both picture of huyo mtoto wa Eric na maribe he be looking alike na Ole itumbi.

Despite the storm on social media, Itumbi congratulated Eric and Jacque and wished them well.

“Congratulations -The Omondi’s. Zahari’s graduation is a great statement of your solid guidance. May your bond last for an eternity and more. To both of you my friends, God’s blessings! Bishop na pia president walisema, ‘Wanaosema, wacha waseme!’ Au sio?” he said.

It is not clear if the two have gotten back together or they have just decided to take care of the baby together. Jacque was engaged to murder suspect Jowie Irungu who is currently remanded at Kamiti Prisons.

Jowie and Jacque are the key suspects in the murder of businesswoman Monica Kimani.

Eric Omondi, on the other hand, was engaged to Italian beauty Chantal Graziola. They broke off the engagement early this year.

It seems fate has brought Jacque and Eric back together again. Will it work this time?