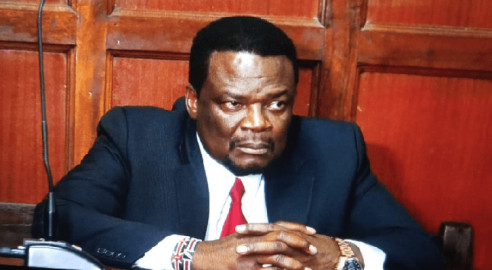 Sirisia Member of Parliament John Waluke has been released after paying a Ksh 10 million cash bail.

He was granted bail after appealing his conviction over the Sh300M NCPB maize scandal case.

The High Court had in October upheld Waluke’s conviction alongside business woman Grace Wakhungu after it found out that the two were guilty of fraudulently acquiring Sh 313 Million from a government agency.

It is alleged that they obtained the Sh 313 million by pretending it was the cost of storing 40,000 metric tonnes of white maize incurred by Chelsea Freights.

Waluke was convicted to 67 years in prison or pay a Ksh 1 billion fine.

The former Ruto ally recently asked the Court of Appeal to treat the case with urgency as he risks losing his seat given the number of sittings he has missed since September.

“There is a clear and present danger that if this application is not heard and determined in a timely manner, the applicant will miss Parliamentary sessions, leading to loss of his seat or failure of representation of the people of Sirisia Constituency in the National Assembly,” he stated.