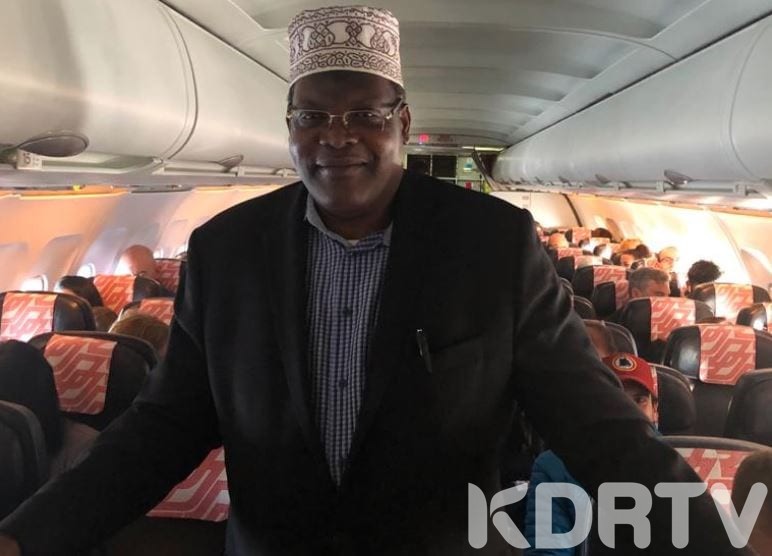 (KDRTV) – Lawyer Miguna Miguna will only be allowed to come back to Kenya using a Kenyan passport, sources within the Interior Ministry have said.

Miguna’s attempts to return to Kenya using his national Identity Card (ID) have twice been blocked in the past 24 hours after he was blocked from boarding Lufthansa and Air France planes.

It emerged that the Kenyan Government had issued a red alert against the self-proclaimed NRM general, warning all airlines from bringing Miguna to Kenya or any other African country. This is despite the Immigration Department and Government spokesperson insisting that the controversial lawyer would be allowed into the country as directed by the High Court and President Uhuru Kenyatta on different occasions.

Read Also: ‘Raila Swore that Miguna Will Only Come to Kenya in a Coffin’

It is because of this warning that Miguna was first ejected from the Lufthansa plane which was set to land in Kenya at 9;25 PM on Tuesday.

“The ministry is supposed to comply with court orders of 2018 and also court orders that were issued yesterday, but the same ministry and the same government went behind the Kenyan people and issued a red alert saying that I should not be allowed to board the flight. In fact, they demanded that my flight be cancelled and my money be refunded, otherwise the flight will not be allowed to land,” Miguna said.

Read Also: Red Alert! Miguna Cannot Board a Flight to Kenya or any African Country

The politician cheekily attempted to board Air France on Tuesday night, announcing that he would land in Kenya on Wednesday morning. But he was ejected from the plane a few minutes from taking off. He was given the same reason; red alert!

Air France removed me from Flight AF0814 from Charles De Gaulle Airport to JKIA, which was about to take off. Despot Uhuru Kenyatta and Conman Raila Odinga are so afraid, cowardly, tyrannical and weak that they have sent RED ALERTS to all airlines. We shall never surrender! pic.twitter.com/SRdOZqlvxR

It has now emerged that Miguna will only be allowed if he uses a Kenyan passport. His passport was confiscated by Kenyan police officers during his dramatic arrest in 208. The lawyer must, therefore, go back to Canada and apply for a new one at the Kenyan embassy.

“Let him apply for a Kenyan passport at the Canadian capital where we have an immigration office. Once he gets it, he can come over. We don’t want trouble here,” said a highly placed source.

On Monday, the High Court ordered the government to allow Miguna into the country using his national ID. It also directed that he should be issued with his passport upon landing.