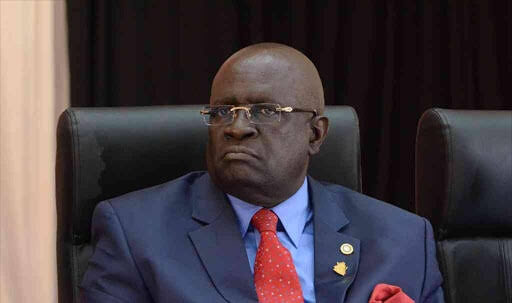 (KDRTV) – The Public Service Commission (PSC) has laid down the groundwork for the sacking of Education CS George Magoha after stripping him of some key powers.

In a statement on Friday, PSC announced that Magoha will no longer be in charge of the Human Resource Function. Basic Education PS Belio Kipsang will now take charge of this key function.

“The commission has withdrawn its powers and functions from Cabinet Secretary Prof George Magoha and delegated the said powers to PS Belio Kipsang with immediate effect,” reads the circular by PSC Chairman Stephen Kirogo.

This means that Magoha does not have the powers to hire or fire staff at the Ministry, and could be the first step towards getting the chest-thumping Minister out of Jogoo House.

This is arrogance at another level from CS Magoha.
You must respect your juniors, how do you call a grey haired man stupid?.
He did well not to argue with you.@Prof_magoha pic.twitter.com/ZO5Ftvd1PH

PSC has been forced into making the hard decision, after Magoha was caught on camera insulting a senior Ministry official.

In a video which has elicited criticism on social media, the CS insulted the Uasin Gishu County Director of Education Mbaga Gitonga in front of teachers and pupils at Langas Primary School. It did not help the CS that the director was an elderly man.

There have been several calls for President Uhuru to fire Magoha for bullying junior employees.

PSC withdraws power to manage the HR functions it had delegated to the CS Magoha, with immediate effect. Dr. Richard Belio Kipsang to take charge. pic.twitter.com/cr4qMvwXS9

But the CS has dismissed claims that he is leading the  Ministry with an iron fist. While addressing the media in Machakos this week, he said he should be allowed to do his work.

On the Langas incident, he accused some senior government officials of not working despite being paid heavily.

Magoha was appointed by President Kenyatta in February last year to replace Amina Mohammed as the Education CS. Amina was switched to Sports.

If fired, he will be one of the shortest serving CSs in the Uhuru administration.