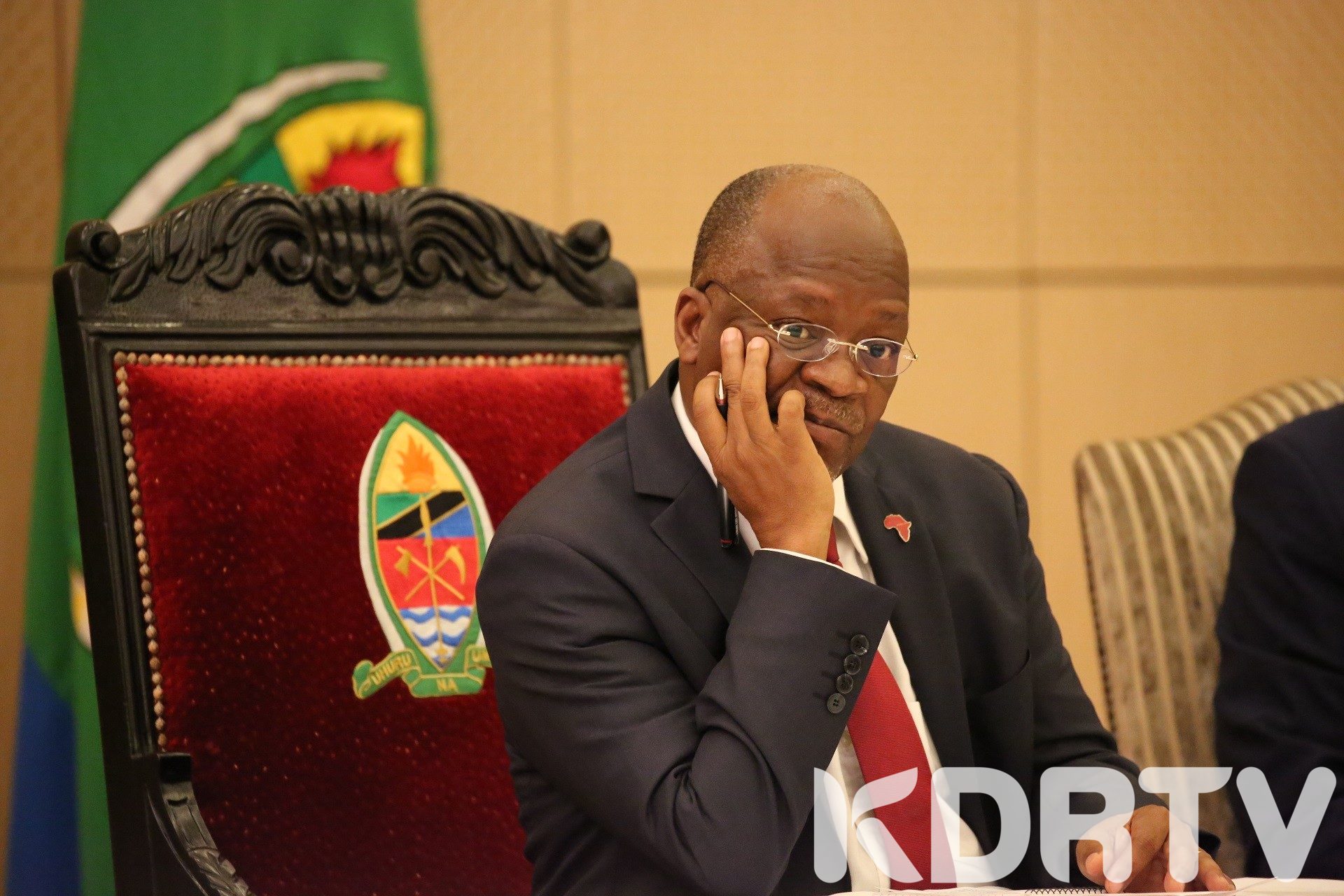 (KDRTV Dodoma) –  Tanzanian President John Magufuli stood strong and denied them entry into Tanzania and blocked them from accessing the rich mineral resources in the Country.

The official who spoke to KDRTV News  Channel correspondent in Tanzania, requested anonymity, because of the sensitivity of the information who also revealed that they are investigating all the leads and will come with a conclusive report on how their beloved President Dr. John Pombe Magufuli died a man who was very energetic and healthy.

The Government official disclosed very scanty details of the events that led to the President’s condition which deteriorated so fast and worsened day by day until his demise which is still a mystery because the Vice-president who announced the death said that he died on Tuesday evening East African time while online rumors indicated that he died in a Kenyan Hospital in Nairobi.

The Government is piecing together all the information at their disposal and involve international investigators to look into any possible collusion within the Government circles and rule out any foul play because his death is suspicious though they claim that he died of a heart attack as announced by the Vice-President Samia Suluhu.

The Government is also wondering how an Opposition leader received privileged intelligence information on the President’s health before it was made public.

In another development, President John Magufuli in a public speech in one of his public functions claimed that during his tenure as a Minister for roads in President Benjamin Mkapa’s Government, his cabinet colleagues poisoned him because of jealousy as the President showered him with praises as he performed his duties diligently. President Magufuli is credited with transforming Tanzania’s road and rail network across the country when he was Minister for Roads. He is also credited with Transforming the Air Travel as he revived Tanzania Air which was struggling. Many bridges, schools, and Markets are also credited to him.

Bill and Melinda Gates Foundation is alleged to have Africa reign on John Magufuli’s cavalier disregard of Covid’s impact in the great lakes region by fuelling conspiracies and endangering lives as reported by the Guardian Newspaper.

Rest in Peace Magufuli. Tanzanians and the Entire Africa Loved You.
We shall Miss You……
Miguna miguna #ripmagufuli
pic.twitter.com/VohxlHhbJ3

Former Tanzania Presidential candidate, Mr. Tindu Lissu who run against Dr. Pombe Magufuli, in the 2020 Presidential election,  claimed on his social media accounts and on BBC TV show that the President was critically ill and had been flown out of the country for specialized treatment.

President Dr. John Pombe Magufuli directed that all minerals that are extracted in Tanzania must be manufactured in the Country and no raw materials should be exported without prior approval from his officials which made it very difficult for companies from the east or western Countries to access the raw materials and export them to their countries.

In a recent event that shocked many people, he impounded raw materials at the Port of Dar es Salam which were destined for China, and demanded that the firm should manufacture the materials in Tanzania and sell them to their customers as finished products because they were giving Tanzania a raw deal or paying pennies for the raw materials and make millions after the value addition on the materials something many local and international economists agreed with him.

This action angered many international firms who threatened to pull out of Tanzania in protest but this did not deter President Magufuli from standing his ground and told them off and if they don’t play along they should keep off Tanzania.

The President blocked some manufactured products from the neighboring countries and directed the Tanzanian Revenue Authority to charge high levies on the products in order to protect the local manufacturers. He dealt ruthlessly with his neighboring Countries and his lowest moment came when he ordered his officials to burn 10,000 one week old chicks that were imported from Kenya.

He didn’t spare the Kenyan Maasai community whom he forced to pay hefty fines in Courts for grazing their cattle on the Tanzanian’s soil by impounding them and arresting the cattle herders and locked them up for several weeks before the intervention of the Kenyan Government who pleaded for their release. The Maa Community who share a common border with their relatives in Tanzania were shocked by this action till to date.

President Magufuli barred his Ministers from unnecessary international travels and expenditures. He was also considered an enemy to his neighbors whom he claimed were exploiting Tanzanians and expelled thousands of them from Tanzania claiming that they were occupying jobs the locals can comfortably do.

History will be more kind to President John Pombe Magufuli (1959-2021) … He did his best to end corruption, wean Tanzania of relying on donor funds & ripped unfair foreign mining contracts … And he was a devout Roman Catholic … May God accept him to heaven .. #ripmagufuli pic.twitter.com/AzIBc3Qegl

The Opposition leaders claim that Dr. Magufuli died of Corona Virus (Covid-19) while the Tanzanian Government denies those rumors and have told the Media that he died of a heart complication which he was suffering from for the last 10 years though KDRTV News could not verify this information by the time his demise was announced by the Vice-President on National TV.

An undated and unverified Newspaper cut which is circulating on social media claims that President Magufuli was flown to London while he was undertaking his masters degree at the University of Dar Es Salam du to a Heart complications also known as Hypertrophic Cardiomyopathy which needed him to undergo a surgical procedure in a London Hospital.

President Dr.John Pombe Magufuli has been advocating for Pan-Africanism ideals just like the late Ghanian President Mr. Jerry Rawlings, Thomas Sankara of Burkina Faso, and Patrice Lumumba of the Democratic Republic of Congo formerly renamed Zaire by former Strong man Mobutu Sese Seko, who ruled the country for over 3 decades before he was overthrown by Laurent Kabila in the late 90s.

Dr. Magufuli sacked any Government official accused of corruption on site and became a darling to many Tanzanians who revered him for his open court system and justice. During his short stint at the Presidency, Tanzania has seen tremendous infrastructural development throughout the Country and they nicknamed him the Bulldozer based on how he managed his work and track record from the time he was the Minister for roads which saw massive infrastructural development undertaken in the Country.

His zealous pursuit of accountability in a reformist government won him 👏, but the denial of Covid19 is most probably the saddest ending to a legacy riddled with the mentionables and the unmentionables. Yote ni vanity #ripmagufuli #Tanzania pic.twitter.com/XxG2qaAYD1

He believed that African problems must be solved by the Africans and became a laughing stock from the Western Countries because of how he viewed what he called exploitation as he made very drastic changes to governance structures and his zeal to curb corruption.

Many Tanzanian elites viewed him as a threat to their existence and accused him of high-handedness and extra Judicial killings, some fled the Country and sought refugee status in different countries.

President Magufuli wanted to transform Tanzania to become like Singapore or Malaysia and had tasked technocrats to draft changes in his Government for a speedy restructuring process to emulate what the Malaysian leader Mahathir Mohamad did when he was the Prime Minister from 1981-2003 which made Malaysia to become the fifth Asian Tiger after Hong Kong, South Korea, Singapore and Taiwan.

The former Presidential Contender Mr. Tindu Lissu accused him of rigging the 2020 Presidential election in his favor and almost 90 percent of Parliamentarians were elected on Chama Cha Mapinduzi tickets while the Opposition cried foul and called the elections an exercise in futility because of malpractices.

President Magufuli has always accused the West of making the African population poorer and also claimed that the vaccines produced in the west might harm the African population, in the long run, claiming that their intentions were not genuine. He cautioned Tanzanians against taking the Vaccines a thing which caused him to be at loggerheads with the WHO who accused him of misleading Tanzanians.

WHO accused his government of not releasing Covid-19 data in his Country after several requests which angered the World Health Organization body and Tanzania found itself on the wrong books but this did not deter President Dr. John Pombe Magufuli to push ahead with his agenda.

In this article:Headlines, John Pombe Magufuli 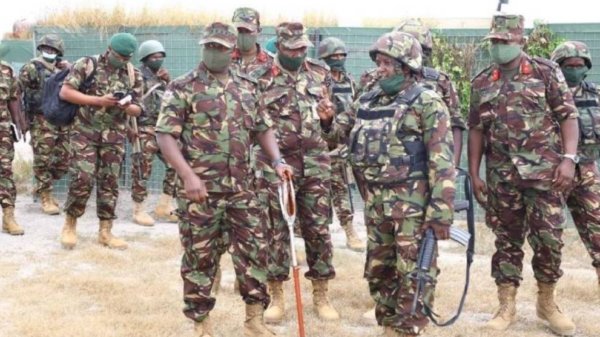 REVEALED: The Exact KDF And Army Officers Salaries In Kenya In 2020

(KDRTV) – As a member of the commonwealth nations, Kenya has an almost identical military structure to that of the British Army. Today we...