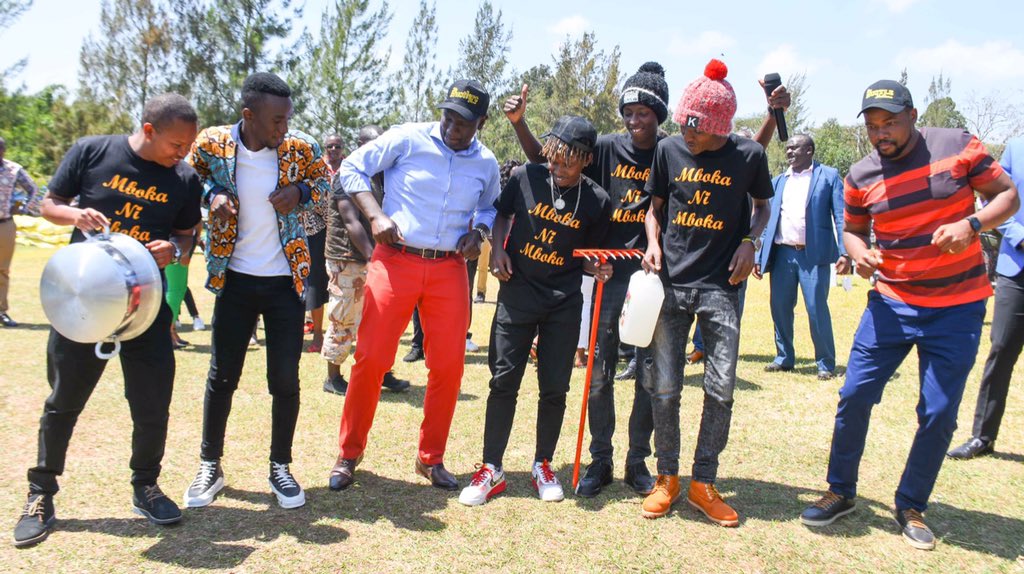 (KDRTV) – Deputy President has surprised Kenyans with a new slogan ‘mboka ni mboka’ to justify his donations of wheelbarrows and water tanks to youth and women groups, a venture criticized by his opponents.

Mboka ni Mboka is a sheng slogan translated from its Swahili version of ‘kazi ni kazi’ and it means every job is important. The DP’s camp has gone further and introduced the #EveryHustleMatters tag which is being popularized on social media.

This week, a group of Gengetone artists released a version of the Mboka Mboka song in praise of the DP’s philanthropy. The song done by Wakali Wao praises Ruto for the work he is doing to promote their hustles.

And to justify how serious the DP rates the song, he invited Wakali Wao to his Karen Residence on Tuesday where they performed the song. The DP was recorded dancing to the tune and even pushing a wheelbarrow.

Ruto is deliberately tailoring his campaign strategy to attract the youth with slogans like hustler and now mboka ni mboka. He has also spent a fortune on carts, car wash machines, water tanks, sewing machines, and even shoe shining equipment to youth especially in Nairobi. These donations have directly benefited hundreds of youths.

The DP’s critics claim that his tokenism will not help the youth in the long term. The DP, according to the youth, should come up with policies that will ensure youth get sustainable employment.