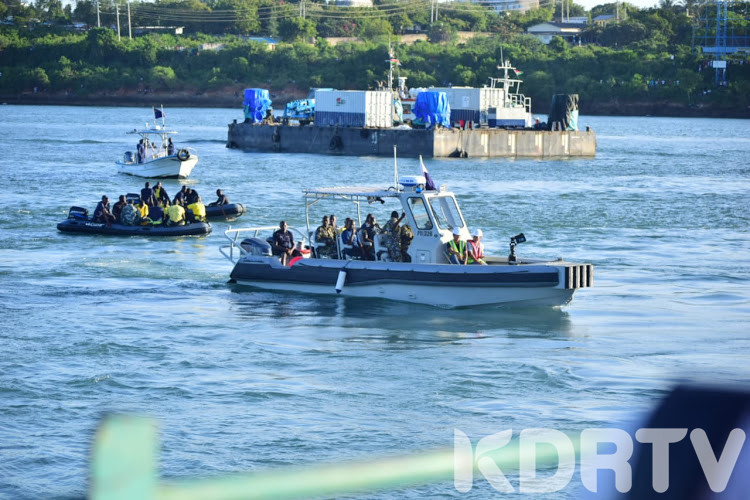 The vehicle that plunged into the Indian Ocean with mother and child on board has finally been retrieved from the seabed, almost 13 days since the incident occurred. This brings to an end, the tragedy that has captured the imagination of the country for almost two weeks.

The family of Mariam Kighenda and her four-year-old daughter Amanda Mutheu can now start the process of mourning their loved ones.

Mombasa governor Ali Hassan Joho was one of the hundreds of people turned up at the Likoni Channel to witness the recovery operation that was coordinated by the multi-agency team that included Kenya Navy and elite divers hired from South Africa. Cranes were deployed to pull the Toyota ISIS car from the seabed.

Earlier on, government spokesperson Cyrus Oguna promised that the operation would be concluded by the end of the day.

“We are hopeful that the whole process will come to an end by the end of today,” Oguna told the media on Friday morning.

The government announced on Tuesday that the car had been spotted 58 meters deep into the channel. This was 11 days since the incident happened.

Read Also: ‘Angry gods are Hiding Likoni Victims in their Caves, They Want Blood Before Releasing Them!’

Efforts to recover the vehicle on Thursday did not bear fruits. The operations had to be suspended due to strong sea currents which posed danger to the divers.

A video footage that went viral on social media showed the car lying upside down. a review of the footage showed a human hand from the window of the vehicle.

The tragedy has been a hot potato for politicians especially happening just days to Mashujaa Day celebrations which will happen at Mama Ngina Drive, a stone throw away from the scene.

The long wait is over. Kudos to the Kenya water forces for retrieving the Likoni channel mother and child remains. Over the family for burial rites. God be in your way.

Mombasa governor issued Ksh 2 million to the family to hire the South African Divers. The Jubilee faction of ‘Inua Mama’ had threatened to boycott Mashujaa Day and rally women to the scene of the accident.