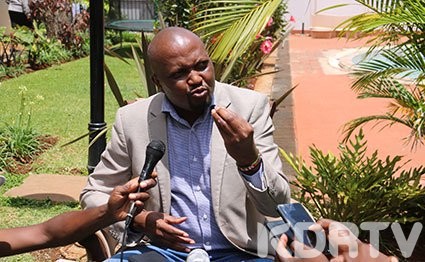 (KDRV) – Controversial Gatundu South MP Moses Kuria is once again on the spot for all the wrong reasons after allegedly assaulting a helpless woman.

The woman claims that she met Moses Kuria at the Royal Media Services Studios for a discussion on the BBI report. It is here where the MP kicked her.

According to Joyce Wanja, she asked Moses Kuria to retract some of the statements he had told women at a function to help orphans in Kiambu the previous week.

Kuria had allegedly accused the women of wearing smelly panties. He also said most of the women were whores who could be bedded anywhere without shame.

Wanja told him that such words could not be spoken in front of young children and church elders.

It is at this point that Moses Kuria punched her so hard that she had to be helped to stand up by some of her colleagues.

She said she recorded a statement with the police, with a P3 form showing how she was assaulted but Kuria has not been arrested or summoned by the Directorate of Criminal Investigations (DCI).

This is totally unacceptable especially coming from a leader … Moses Kuria should be rotting in Kamiti or Shimo la tewa now #ArrestMosesKuria pic.twitter.com/0w7bxfYQq7

The woman has called on the office of the Director of Public Prosecutions (DPP) and DCI to help her get justice. She said she has no money to hire a lawyer.

On Friday morning #ArrestMosesKuria was trending at number one on Twitter with bloggers calling on the relevant authorities to help Wanja.

Its time we as kenyans of good will start distancing ourselves and avoiding any association with people who assault women #ArrestMosesKuria pic.twitter.com/Vfx34UI8Da

Moses kuria cant handle the truth he results to violence…justice to this lady is must we are all kenyans #ArrestMosesKuria#MigunaReturns #JusticeToAll https://t.co/WnbASfLvt2

Kuria had not responded to the accusations by the time of going to press, though a section of netizens defended him saying the woman could have been used to soil the MP’s image. Some people argued that the assault claims could be related to Miguna Miguna’s deportation stalemate. Moses Kuria has accused ODM leader Raila Odinga of sabotaging the lawyer’s return to Kenya.