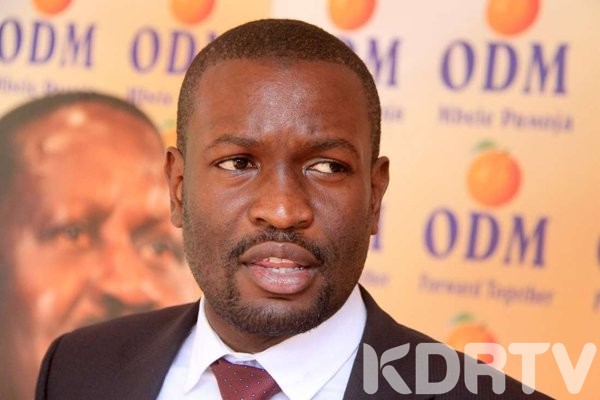 The Orange Democratic Movement has vowed to dissolve the National Super Alliance Coalition after the Kibra race.

Speaking while making a campaign stop in Kibra, ODM’s Secretary General Edwin Sifuna affirmed to have been given a go ahead by the Party Leader Raila Odinga to have the party exit the coalition.

According to Sifuna, Odinga had already issued a directive to have him sign the dismissal agreement since the coalition was no longer helpful nor functional.

The ODM party accused the other NASA co-principals of betrayal and going against the coalition manifesto through fielding candidates to compete in a region that had an earlier ODM Member of Parliament.

“We as the coalition should have worked together as friends and not be opposed by people who claim to be our friends. We want to know our friends and that is why I am ready to sign the Memo of ODM exiting NASA,” said Sifuna.

READ ALSO: I Will Flood Kibra With Progressive Development. Vote For Me And You Will See Change, Mariga Woos Voters.

Ideally, the secretary general mentioned Jubilee’s Mariga’s candidature saying that as a party they were not afraid of his presence in the ballot since he will be defeated with a margin.

The NASA coalition was formed during the 2017 general elections with co-principles including Musalia Mudavadi of ANC, Kalonzo Musyoka of Wiper Party, Moses Wetangula of Ford Kenya and Raila Odinga of ODM.

These parties came together to counter the Uhuru-Ruto train in the last elections that were filled with controversies and a Supreme Court Nullification.

The Kibra seat went vacant after the late MP Ken Okoth succumbed to cancer, with a replacement set to be elected.

Initially, the President paid homage to the handshake and opted out from the seat to pave way for ODM and its candidate.

However, things took a new twist after Ruto allegedly planted a candidate in a bid to contest with Odinga and battle supremacy ahead of 2022 elections.

Musalia Mudavadi ideally unveiled his candidate Eliud Owallo which was viewed as betrayal by other NASA and ODM leaders.

Mudavadi on tghe other hand has refuted the betrayal claims adding that it was a constitutional right and that he did not owe anyone including Raila an explanation as to why he unveiled his party’s candidate.

“Kibra is not Raila’s bedroom and as far as I am concerned we have not betrayed anyone politically. Leaders should refrain from making such utterances,” said Mudavadi.

READ ALSO: Kibra Is Not Raila’s Bedroom, Lashes out Mudavadi.

Well, with the race at its peak with intensified campaigns, the NASA coalition might have just hit a dead end with parties dissolved and exiting in their own terms.

other factors including the handshake are at risk ahead of the by-election with some leaders smelling foul play and betrayal.