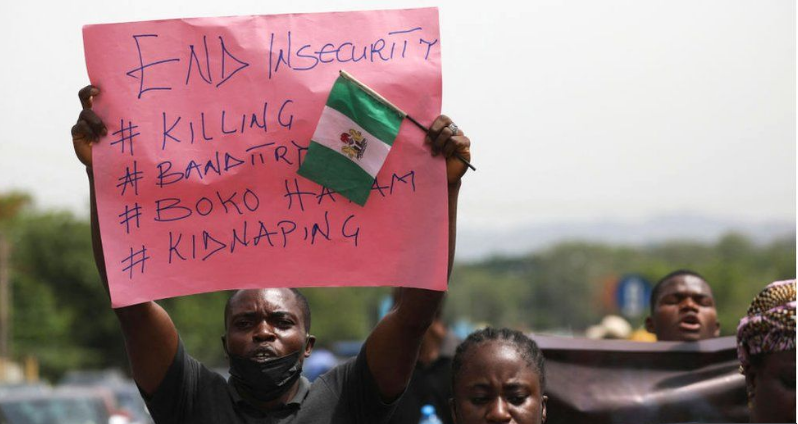 Nigerians protesting against insecurity challenges in the country

KDRTV NEWS: Nigerian civilians have been urged by the Governor of the north-western Katsina state Aminu Masari to arm themselves against criminal gangs.

In his statement, the governor faulted the citizens for the continued attacks by the armed gangs.

According to the head of state, the gangs are emboldened by what he referred to as people`s “meek submission.”

The governor made sentiments on Tuesday during a visit to the town of Jibia- one of the communities that were recently affected by violence.

READ ALSO: Nigerian Man In Court For Forcing Murang’a Girlfriend Into Oral Sex And Posting Video, Charged With Threatening To Kill Her

At the same time, the Nigerian defense minister was also condemned in February when he made the same comments.

In the viewpoint of many Nigerian, through such comments, the Nigerian government is admitting its failure to protect the citizens from the wrath of the armed criminal gangs.

The citizens condemned the top government officials for encouraging the citizens to acquire weapons to confront the heavily armed criminals gangs.

In recent years, cases of bandits abducting villagers and school children for ramsons have spiraled.

The ongoing violence have resulted in milllions of people being displaced and thousands being killed.

The abduction of school going children made authorities to close schools in certain areas.

The goevrnemnt of Nigeria has seemingly failed to adress the security concerns in the country something that economic experts veiew as a threat to country`s economy.

KDRTV is not sure if Nigerian government will seek intervention of the internation community or will continue to fight the bandits alone.

Apart from armed bandits, Nigeria is also considered as country that is still suffering from the paradigm of lack of freedom of speech.

However, the citizens defied the ban and continued to use the platform with the back of the international community.