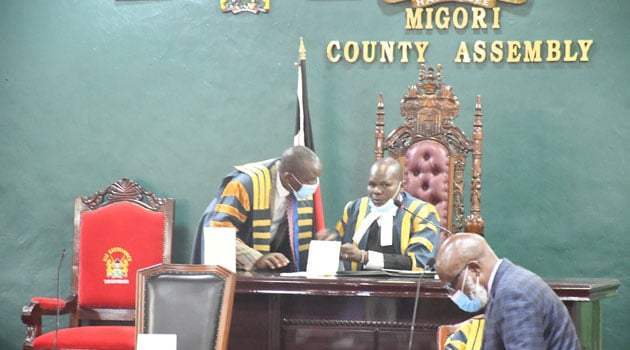 (KDRTV) – The impeachment motion against Migori Governor Okoth Obado will not be tabled this afternoon after today’s session was adjourned.

Migori County Assembly Speaker Boaz Okoth said he was forced into the decision due to security reasons. He said he fears for his life after the withdrawal of his bodyguard on Tuesday night.

This is the second time that the motion has been adjourned following a similar occurrence on Tuesday. The speaker cited COVID-19 regulations as the reason in the first incident.

There has been political tension in Migori over the planned impeachment of Governor Obado who is facing corruption charges in court.

ODM Party wants the Governor to vacate the office because the charges he is facing will affect service delivery to the people of Migori.

Senior ODM members have accused Obado of attempting to bribe and intimidate MCAs to scuttle the impeachment motion.

On Tuesday, ODM leader Raila Odinga’s spokesperson Dennis Onyango asked the Directorate of Criminal Investigations (DCI) to investigate the money trail in Migori. He said Obado could have compromised lawmakers and even journalists in the county.

On the pending impeachment motion in Migori, the @DCI_Kenya may need to conduct money trail between Migori County official and unofficial networks and reporters and radio commentators in vernacular radio stations and even national newspapers.

Obado has denied these claims, saying the lawmakers have brains and cannot be coerced. The governor said he is being persecuted by some very corrupt people who want to sanitize themselves using his image.

He said Migori is one of the developed counties in Nyanza and that he should be allowed to reach Canaan just like everyone else.