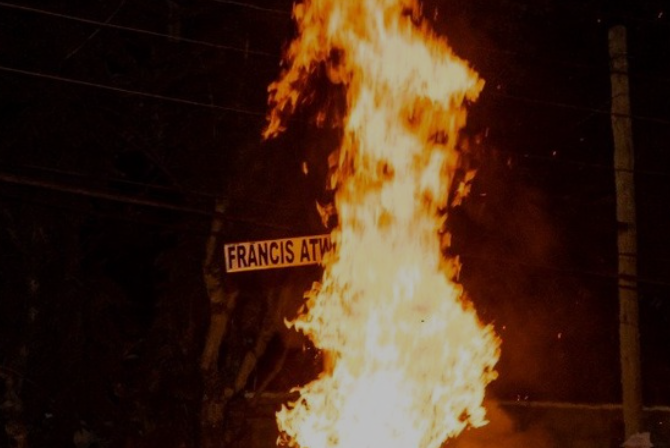 It’s the second time the controversial road sign, formally known as Dik Dik road, has been brought down despite efforts from the Cotu boss to ensure that it stays put.

Photos of the road sign up in flames have gone viral on social media prompting the 71-year-old to speak up regarding the vandalism that happened on Monday night.

The road sign named Francis Atwoli Road has been burnt as a gift for his re-election 😂😂 pic.twitter.com/f05FCsqDsr

“Bringing down an honorary road signage under my name does not hurt me,” he said on Twitter.

“On the flip side, it will haunt, for life, those who are behind it. For how does it benefit them? How do you sleep at night knowing you are a vandal?”

Led by activist Boniface Mwangi, Kenyans have insisted the Kileleshwa street shouldn’t be named renamed after it emerged it was done irregularly.

According to the Nairobi County Standing Orders, renaming a road should be introduced as a motion before the House and if approved, it is effected.

Deputy Governor Anne Kananu in May renamed Mandera Road in Kileleshwa after Atwoli to honour the veteran unionist for his efforts in agitating for workers’ rights.

“This road has been renamed after my good friend and brother bwana Francis Atwoli in recognition of his selfless contribution and agitating for the rights of Kenyan workers in the last 54 years,” said Kananu.