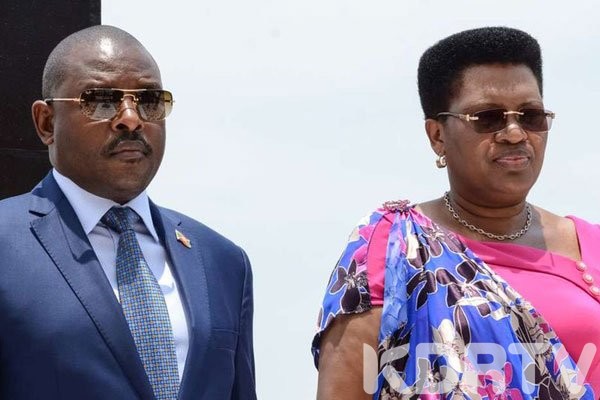 (KDRTV)-The wife of the deceased Burundi`s President Pierre Nkurunzinza, Denis Bucumi is still receiving medication in Kenya after she tested positive for COVID-19

The outgoing first lady was airlifted to Nairobi from Bunjumbura on night of Thursday, May 28, by a plane belonging to Medical and Research Foundation (AMREF) flying doctors.

Reports indicate that the wife of the late Burundi president fell ill in the evening of Saturday, June 6, after attending a football match that day

So far, president Uhuru Kenyatta has sent message of condolence to the Burundi`s first lady following the death of her husband.

According to president Uhuru Kenyatta, Nkurunzinza was a prominent leader whose efforts towards integration and progress of the region will be missed dearly.

“In his message, President Kenyatta termed the outgoing Burundi leader as an outstanding regional counterpart who served his country with distinction as head of state and government, and worked tirelessly for the peace and stability of his country and the Great Lakes Region,” a tweet by State House read.

1/3 President Uhuru Kenyatta has sent a message of condolence and comfort to the People of the Republic of Burundi🇧🇮 and the family of His Excellency President Pierre Nkurunziza who passed away today. pic.twitter.com/lhSjHyQpAM

According to our previous reports, the Burundi`s president died in hospital after reportedly cardiac arrest

At the same, Raila Odinga has condoled with the Burundi people as he calls for peace, hope and stability of the people

I wish the people of Burundi Peace, Hope and Stability at this moment of mourning following the death of President Pierre Nkurunziza. Our thoughts are with the First Family. May Burundi’s institutions stand firmly for the country and the people.