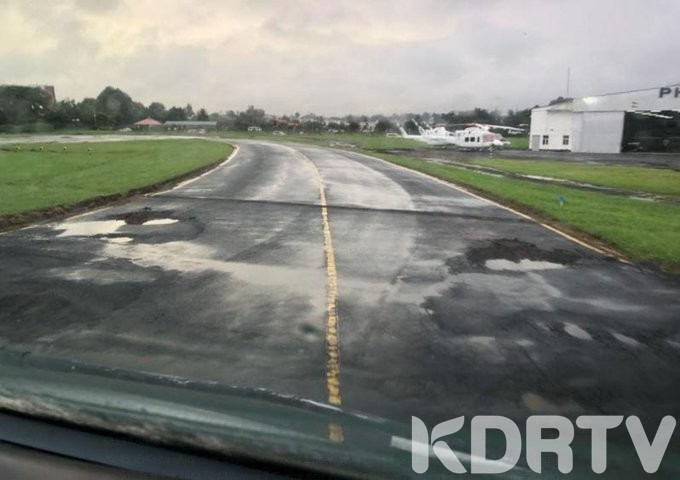 The current poor state of Wilson Airport Runways have raised concerns among operators and ignited fury from the general public.

Ranked one of the busiest airport in the continent since its establishment in the 1920s, Wilson airport has now been put on the spot with increased numbers of averted accident.

The Kenya Civil Aviation Authority(KCAA) has issued a statement pledging to improve the operations at the airport after recent minor accidents of safarilink airline and silverstone air.

Yesterday, a safarilink airplane veered off the runway leading to panic and although the occupants were unhurt, the incident has left passengers scared for their lives.

Ideally, a silverstone airplane lost wheels midair forcing an emergency landing and evading what was termed as a fatal accident.

“The runway was very wet but what struck me was the potholes” Dennis Okari speaks on Silverstone plane crash at Wilson Airport https://t.co/jaYpugTXOl pic.twitter.com/vjULKZ7eW2

Through the KCAA director Captain Gilbert kibe, the airport is in dire need of urgent repairs and renovations to reduce the minor accidents witnessed in the recent days.

“There are potholes in some of the runways which need to be fixed as soon as possible to ensure smooth operations at the airport. The runways will remain closed until the repairs are done and if we are satisfied with them then we can reopen it,” said Captain Kibe.

In recent shared pictures, the runway for the airport was filled with potholes and small trenches that seemed dangerous and detrimental to air transport.

Ideally, the poor state of the runways have been linked to the veering off the runway by airplanes with social media users calling upon the authorities to take charge and restore the state to a good shape.

READ ALSO: Silverstone Air Crash: What We Know So far

One social media user Timothy Njue stated faulted the government fro failure to put measures and directives in ensuring air transport in the country is upheld with high standards.

Njue added that the Government together with legislators were adamant and only awaited a disaster to occur until they take serious actions.

“The poor state of the runways at Wilson airport is very dangerous. Sad enough is that the Government as leaders are quiet and only waiting for a crisis before they get vocal,” said Njue.

READ ALSO: Flights Diverted From JKIA Due To Foggy Conditions In Nairobi

The head of Silverstone airplane today issued an apology to its customers, pledging to rectify the issues underlined and secure the safety of passengers.

“We maintain our aircrafts regularly and we make sure that they are all in good condition before flights,” said Victor Gatheru, the Head of Maintenance, Silverstone.

The Civil Aviation Authority is currently probing the airline over the recent incidents with assess made on the level of compliance to the safety measures by the airplane.