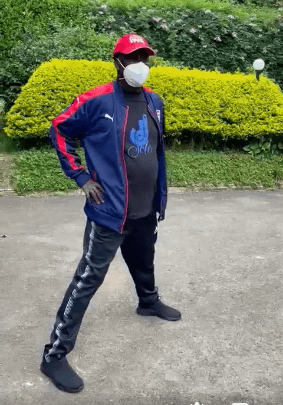 Raila took to his social media account to share a video of him performing physical, which conversion will his daughter Winnie Odinga.

“I’m feeling wonderful. It’s so nice to be back home, I was in a prison back there.

“Even though I’m still in isolation, I can now see the beautiful outdoors and nature,” Raila stated.

KDRTV understands that Raila Odinga was admitted to the Nairobi Hospital on Monday, March 8 and was later discovered with Covid-19.

Raila said, “Glad to be back home in his Facebook post. I’ll be strictly self-isolating until further notice.”

The physician who spoke the nation said that Raila decided to make his status public after being encouraged by international leaders such as former US President Donald Trump, British Prime Minister Borris Johnson, both tested positive for Coronavirus.

“He ordered that his results be made public and be accompanied with a personal statement to Kenyans that Covid-19 is real and they need to listen to what the government is saying,” Dr. Olunya stated.

Olunya also said that the ODM leader responds well to the coronavirus treatment.
In his statement, Raila hailed the support he got from his fans and leaders worldwide.

“I wish to assure fellow Kenyans and my friends across the world that thanks to their prayers and encouragement, I am out of danger, but I will continue observing the recommendations of my doctors for as long as necessary.

“I am strong and inspired because of your prayers, support, and encouragement,” he said.

Before Raila Odinga was admitted to the hospital, he embarked on the Building Bridges Initiative (BBI) Campaign.

Several potential contacts of the ODM leader has sought Covid-19 tests, and many have gone into isolation.