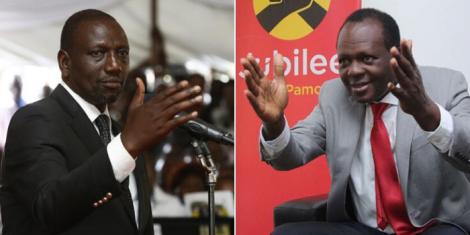 (KDRTV) – Jubilee Secretary-General Raphael Tuju has said he called Deputy President William Ruto and asked him to issue a public statement over the utterances of MPs Johanna Ng’eno and Oscar Sudi.

In an interview with Citizen TV on Tuesday evening, Tuju said the insults directed and former first lady Mama Ngina Kenyatta was being done with the DP’s name.

“I called the DP this afternoon (Tuesday) and I made my position very clear because some of these things are being done in his name, he has to come out and express himself on this matter. There is no other way about it. He told me he had tweeted about it but I don’t think that is going to satisfy so many people,” Tuju said during an interview with Waihiga Mwaura.

The former Rarieda MP said no one can be equalled to Mama Ngina Kenyatta in the country at the moment. Mama Ngina, according to Tuju, was detained during the fight for independence and deserves her respect.

The DP is said to have raised concerns about the insults he has been receiving from Jubilee Vice Chairman David Murathe, which Tuju promised to handle.

“You cannot compare Murathe’s issue with taking on the former First Lady Mama Ngina Kenyatta, there is now way by which you can equate the two. The former First Lady is nobody’s peer in this country today…” – Raphael Tuju, Jubilee Party Sec. Gen. #NewsNight pic.twitter.com/QMGmR6oa21

Tanga Tanga blogger Dennis Itumbi has disputed these claims, saying Tuju has never contacted the DP over the matter.

“Raphael Tuju is lying on TV. DP William Ruto is the one who called him asking why Jubilee Headquarters has been closed down for the past SEVEN months. Yesterday too he did NOT pick up DPs call. Today, he also did not pick up. Why would he lie?” Itumbi said through a tweet.

Tonight @RaphaelTuju_EGH returned the call. DP @WilliamsRuto told him he will working from the Party Headquarters next week and he would wish to meet him or whoever is available when he goes there. The rest of the things he is saying @citizentvkenya ni UWONGO! #HustlerNation