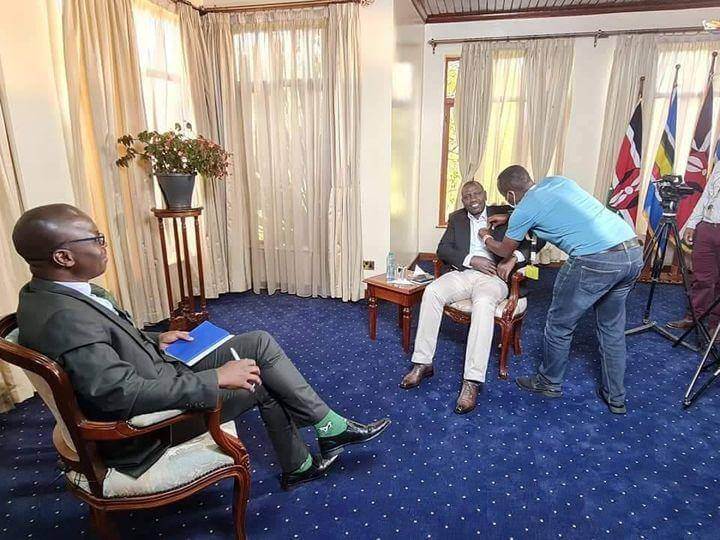 DP Ruto:…This is a constitution-making process. The constitution is about every Kenyan, myself included. If it is being amended, I do not have the luxury to stand aside and do nothing about it…I do not want history to judge me for not stepping out to speak out#DecodingRuto pic.twitter.com/PWK8lZ6mtm

Ageyo met the DP, in an attempt to decode his stand on the BBI report. From the beginning, the DP had a very hard time explaining why he has not taken a stand on the report and what his call for a consensus meant.

Interviewing an intelligent person need wisdom.Joe has just remind me of the speaker of the primary school debate forcing you to shout yes or no #DecodingRuto @jageyo @citizentvkenya next time look for a smart guy to interview Dr.William

Ruto was also put to task to explain how having a referendum in 2022 will address some of the other changes his team had asked for. Specifically, Ageyo questioned how parliament will achieve the two-thirds gender rule with the current constitution.

Ageyo also put the DP to the task to explain what is a multiple-choice referendum and how that will be achieved in Kenya. Wouldnt that be confusing voters and how will that be achieved alongside the 2022 elections.

#DecodingRuto @jageyo seems to be asking imaginary questions that he has answers already in his confused head and when DP does not answer the way he wants,he gets more confused and press for the answer in his bald https://t.co/jdNXckkz7o friend focus.

The DP struggled to explain his current defense of the Judiciary when. Ruto has insisted that the proposed Judiciary ombudsman should be appointed by the Chief Justice, to protect the independence of the Judiciary. However, the DP loudly attacked the Supreme Court for nullifying the 2017 elections. Ageyo questioned his change of mind. Ruto said he does not keep grudges.

The only guy who asks relevant political questions. Joe Ageyo is just biased. Citizen Tv should bring this guy back. #DecodingRuto pic.twitter.com/PaRwDHu72O

The man from Sugoi was also questioned about his relationship with President Uhuru Kenyatta. Why he missed last week’s launch of BBI signatures and the COVID-19 conference a few weeks earlier. The DP said he has never missed doing his duties and that President Kenyatta had never complained about his dedication to his work. Furthermore, he told Ageyo that his relationship with Uhuru was not a matter of discussion.

Read Also: How Ruto is Preparing his Supporters for Opposition

It was a tough interview. But in the end, Ageyo did not get the answers he was looking for.