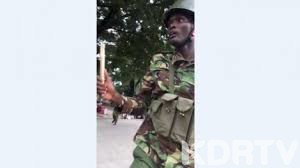 A top Kenyan journalist was on Friday evening assaulted by cops in Mombasa county.

Mr Peter Wainaina a cameraman attached to Nation Media was assaulted by the police for recording police descending on citizens two hours before the curfew.

A video making rounds on social media shows the journalist being beaten up by the police as he struggled to balance his camera.

“I was actually doing what I had been assigned to do and was shocked with how the officers started treating me. It was absurd because I did not do anything wrong,” the journalist told Daily Nation.

Coast regional police boss Rashid Yakub apologised for the incident saying that it was really unfortunate.

The police boss further advised that the journalist records a statement at Central Police Station in Mombasa.

Editor Guild president Churchill Otieno said that the officer was a criminal.

“The officer should be disarmed and prosecuted by the law,” he said.

Subscribe to watch latests videos
In this article:Coronavirus in Kenya, Forced quarantine in Kenya