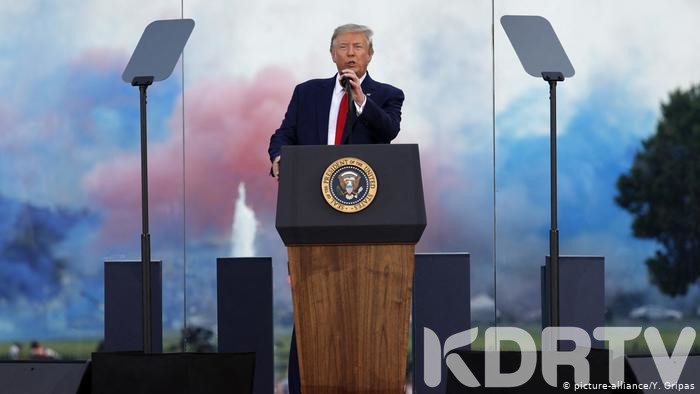 (KDRTV)-As the US celebrated the Independence day, President Donald Trump slammed political rivalries especially China which he referred to as ‘radical left’

The celebrations were muted by twin crisis, the coronavirus pandemic and the protests against police brutality after George Floyyd, African American man was killed by the police.

As Americans crowed the City of Washington DC, Trump used the opportunity to fault political opponents and faulted China for the ongoing global crisis.

“American heroes defeated the Nazis, dethroned the fascists, toppled the communists … and chased down the terrorists to the very ends of the Earth,” Trump said at the White House in his speech.

“We are now in the process of defeating the radical left, the Marxists, the anarchists, the agitators, the looters, and people who in many instances have absolutely no clue what they are doing,” he added, referencing the unrest triggered by the police killing of George Floyd, an African-American man.

President Trump vowed “defend, protect and preserve [the] American way of life, which began in 1492 when Columbus discovered America.”

Trump also assured American that they were close to victory.

“We are on the way to a tremendous victory,” he said.

At the same time, the American President restated his statement that China is responsible for the novel coronavirus

“China’s secrecy, deceptions, and cover-up allowed it to spread all over the world, 189 countries, and China must be held fully accountable,” he said. He also targeted “those in the media who falsely and consistently label their opponents as racists.”

KDRTV understands that this is not the first time US is blaming China for the virus, previously, America had claimed that the virus was made in the Chinese laboratory

The US and China had severally locked horns over the scramble for African country to better their economy.

The virus just widened the rift between two giant countries.