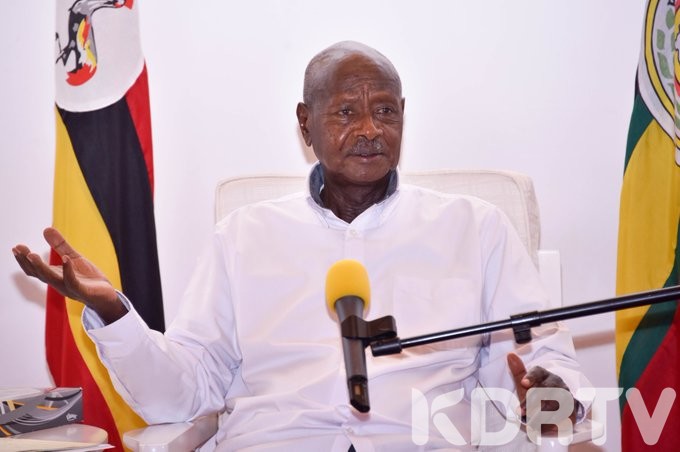 (KDRTV) – Uganda President Yoweri Museveni made true his promise of releasing a video of himself exercising at home on Thursday.

Museveni, who has put the whole country under lockdown as one of the measures to curb the spread of COVID-19, had advised Ugandans not to exercise on the roads.

Speaking during a press address on Wednesday, the President had promised to share a video on how you can exercise at home.

“I saw a video of so many people on the Northern bypass walking and running around that, they are exercising. This should stop. If you want to exercise, you can do that indoors. I will show you how it is done tomorrow. I will do a video for you,” Museveni said on Wednesday.

I saw a video of so many people on the Northern bypass walking and running around that, they are exercising. This should stop. If you want to exercise, you can do that indoors. I will show you how it is done tomorrow. I will do a video for you. pic.twitter.com/eQ6NmcEpZR

And the video of the President doing press-ups found its way on social media on Thursday.

Now, officially Museveni is 75 years old but being an African, he could as well be 85. He is so fit. He shocked the lady who was counting the press-ups so much that she stopped midway.

Someone should advise the President to wear the right attire when exercising. We don’t want him suffocating.

For a very long time, Museveni has been regarded as a dictator who has refused to relinquish power. However, this Coronavirus has been a blessing in disguise for the man who has ruled for more than 30 years.

First, he ordered a total lockdown of the country. He then banned politicians from donating food to Wananchi.

Yesterday, he warned landlords against kicking out tenants because they have refused to pay rent.

To the Landlords trying to evict people because of rent, this is not allowed. We are all in a #COVID-19 crisis. The world is not ending today; you can always demand your money later when all this is over. pic.twitter.com/HtRstIOmCW

The President has also been very vocal on police brutality. He described officers beating citizens in their homes as pigs who don’t know what they are doing.

Ugandans are finally falling in love with their President. It is a pity, it had to be during a very difficult time.

These constant communications from President Museveni make me feel like we are Now close friends!😭😊