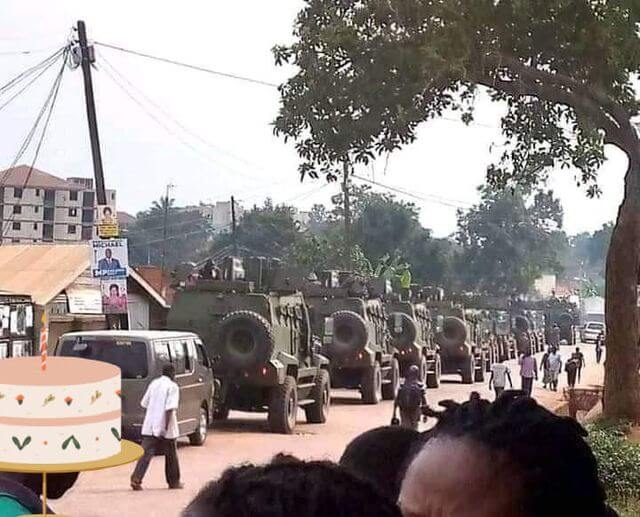 (KDRTV) – Uganda’s dictator President Yoweri Museveni has unleashed military tankers on the streets of Kampala, ahead of Thursday’s polls.

Media outlets both in Uganda and outside the country shared videos of military tankers patrolling the city on Tuesday, just hours to the decisive polls.

In a show of might, UPDF tanks have driven through the famous opposition stronghold down town Kampala. The tanks belong to the land forces commanded by Elwelu.

Uganda is now some 45 hours away from its presidential and parliamentary poll pic.twitter.com/MBlSfKCF4X

Military planes were also seen hovong around the Kampala skies.

The capital city has majorly been associated with opposition politics and analysts believe the military tankers were not only intimidating voters but also a show of might from the man who seeks to extend his 35-year rule on Uganda.

Reports on social media also indicate that Kampala streets are empty as residents opted to keep off. Could this have an impact on the outcome of the elections?

And just like that Kampala is empty!! So who is going to the bush?

Kampala has bore the brunt of Museveni’s brutal police forces in these campaigns.

At least 50 people were killed in November following protest that emerged after the arrest of opposition leader Robert Kyagulanyi, alias Bobi Wine.

Police and the opposition have traded barbs over the cause of the violence.

In fact, on Tuesday, the police claimed that Bobi Wine plans to cause violence in the country by staging his own arrest.

Police spokesman Fred Enanga said on Thursday that Wine will hide in one of the embassies after casting his vote on Thursday.

“He will thereafter allege, through his NUP networks and bloggers, that he has been kidnapped by state operatives,” Enanga said, warning that this will not be tolerated.

The heavy military and choppers flying around kampala is nothing if you watched money heist .🤗 pic.twitter.com/HQzyS72Nwz

The 2021 presidential elections have attracted 11 candidates. Bobi Wine is seen as the greatest challenger to Museveni’s 35-year rule.