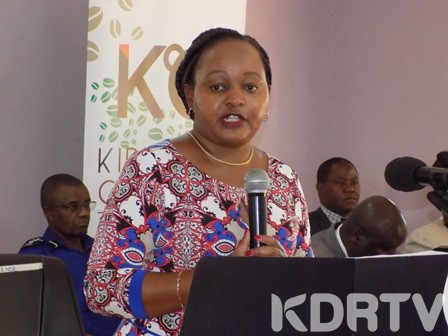 (KDRTV) – Mungu Mbele! These are the only two words that embattled Kirinyaga Governor Anne Waiguru said when reached to for comment by a local daily.

Senate, will this afternoon (Tuesday) begin hearing the charges against the impeached county boss. First, all the Senators will have a say on whether Waiguru should be prosecuted through a committee of 11 members or the plenary (all the 47 Senators).

It seems her prayers are working because according to blogger Dennis Itumbi, Senate Majority Whip has succeeded in convincing Senators that a committee is the best way to hear the charges against the Governor.

Pre-determined debate @Senate_KE tomorrow? Governor @AnneWaiguru has reportedly spent all day packaging evidence in batches of 11 boxes each. Indicative that Senator @HonKangata has had his way in ensuring the matter is discussed at Committee Level, debate is Formality! Heko!

It is easy to bribe 11 Senators than dealing with a whole house. And Waiguru only needs six members of the committee to shoot down the impeachment motion. This explains why her enemies have been rooting for a plenary not a committee.

Waiguru’s prayers seem to be working as Deputy President William Ruto is understood to have met 14 Senators over the weekend and asked them to independently listen to the charges against the governor before making a decision on the motion. In other words, Ruto has washed his hands off the governor’s woes and left her to fate.

This leaves only Raila Odinga running the show. Raila is believed to be working behind the scenes not only to save Waiguru but also to use the outcome against Jubilee in the 2022 elections.

Haha. ODM needs Waiguru more than the Kirinyaga people.And if they are doing that because of BBI I wonder whether its from the Kirinyaga people or Waiguru's one vote. I can remind them that even Kamothos vote she can't deliver in Kirinyaga coz his is in Kipipiri, Nyandarua county

“Ms Waiguru’s records have been too conspicuous, therefore, ODM should not glorify any graft so that it will use it later to campaign against us,” Bomet Senator Christopher Lagat told Daily Nation.

As things stand, Waiguru is going nowhere! She can credit God for that.