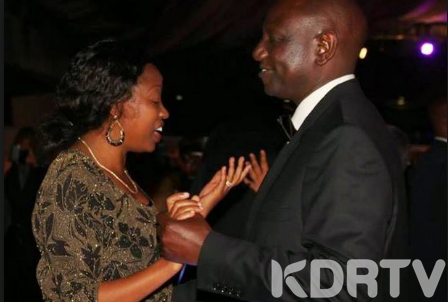 Deputy President William Ruto has celebrated his wife, Rachel Ruto, as the greatest gift to his life. Mama Rachel, as she is fondly called by her husband, turned 51 on Wednesday and the DP took to social media to celebrate her on the special day.

“You are the greatest gift of my life, my peerless supporter and a distinguished mother to our lovely children. I am proud of you,”  Ruto added.

The couple has been married for 28 years. They started the marriage long before venturing into politics. Rachel has not taken an active role in her husband’s political career choosing to remain a staunch Christian praying for the country and her family at large. In August this year, the couple launched the National Prayer Altar at their official Karen Residence.

“Today, my husband, the Deputy President and I, were blessed to have been joined by Fathers of Faith and key leaders in various mountains of influence during the opening ceremony of our National Prayer Altar at the Official Residence of the Deputy President,” Rachel posted on social media.

The DP has publicly maintained that he will go back to serving God when he retires from politics. It is not clear if this decision has something to do with Rachel.

In April this year, during a church function at PCEA Satellite in Riruta, the DP narrated how he met Rachel and their early life together.

The DP did not comment on the Abby’s KCPE performance after her mum revealed to the media that she had scored 406 marks in the results released on Monday. Ruto has previously attended his children’s graduation ceremonies.