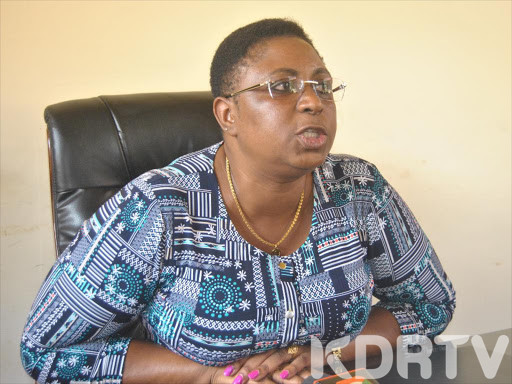 Savage Kenyans have taken to social media to celebrate the arrest of Malindi MP Aisha Jumwa. Jumwa was arrested by heavily armed policemen at her residence in Kakuyuni on Wednesday morning. Police had camped at her gate since 10 pm on Tuesday night.

The arrest follows a fracas that erupted at the home of ODM candidate Reuben Katana in Ganda ward on Tuesday evening. One man was showed dead during a confrontation between Jumwa’s goons who forced their way into the home where training for ODM agents was allegedly ongoing.

The dead man has been identified as Katana’s uncle. He died as he was being rushed to hospital after being shot. It is not clear who fired the shot.

The MP insisted that Katana was holding a campaign rally despite the campaign period being over. The hotly contested Ganda by-elections will be held on Thursday.

A few hours after her arrest, Jumwa remained defiant on social media saying that the police cannot break her resolve because a people united can never be defeated.

A people united will never be defeated. They will never break our resolve!#WeShallOvercome

But a section of netizens could have non of this and reminded her of the dead man and his family.

The family of the man you killed is the one that will overcome. .not you and your hitmen!

You and who? Which people? The same people you never consulted when you opted to join the tangatanga gang? Wewe uende jela, upatane na wanaume wenzako huko. Bure kabisa

Don't go down the drain bcz of your tution teacher….

However, another section of netizens accused ODM of trying to use chaos to win the by-elections. This group alleged that Jumwa is being persecuted for nothing.

@HonJumwa must be released unconditionally, she is not a criminal but a Kenyan who is exercising her democratic right of being in a political party of choice not a terrorist organisation called @TheODMparty.#ReleasedAishaJumwaNow#WeStandWithAishaJumwa pic.twitter.com/I3iIlBIyFW

Aisha Jumwa is being fought politically
They want to make sure that ODM wins the election but they wont win
May justice prevail for the deceased family #WeStandWithAishaJumwa pic.twitter.com/8k7scqCfcj

The events in Kibra on saturday with attacks on @McDonald_Mariga
and now in Malindi targeting @HonJumwa absolves our long held stand that @TheODMparty is an axis of violence and poverty.#WeStandWithAishaJumwa

Am still waiting for a day where @TheODMparty will compete in election's without violence.

And it's only occur when they sense defeat.#WeStandWithAishaJumwa