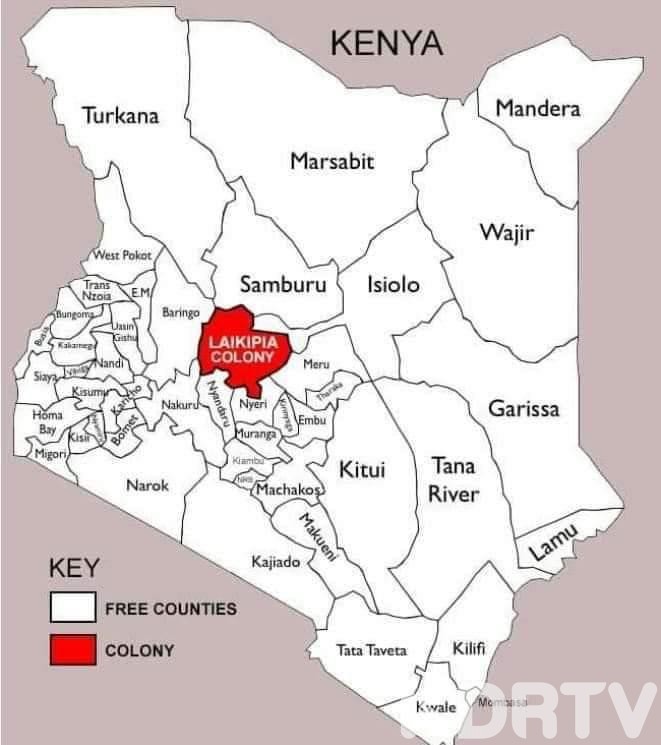 To learn more about Laikipia and it’s owners, which might even include the Queen of England, you need to study the history of NRT, The Northern Ranges Trust.

They run what they call “Conservancies”, in KENYA. And there are quite a few. In all, they cover 10% of KENYA.

Mystery surrounds the role and the existence of the Trust. Ian Craig of Lewa Conservancy, is the Chairman of the Trust that has over time, received millions of dollars from the USA and other countries.

They buy any private land that is not in the hands of the whites. My friend had a piece of land there, which he sold for KES 5 million. His former neighbours, who had been bought out earlier, told him that he could have got KES 15-20 million for it, if he had played hardball.

An MP recently called the Mzungu owned Laikipia Plains, “Little England”. There is something about NRT and Laikipia that Kenyans are not told about. Top Secret, perhaps?

During the last drought in the area, a White Rancher was shot dead and even Kuki Gallman was shot in the stomach, but survived.

The Kenyan Pastoralists had driven their herds in the area, in search of water for their livestock. War broke out.

After some Lodges were burnt to the ground in the area, the British Foreign Minister, Boris Johnson, who is now the UK Prime Minister, was sent to Kenya to find out what was happening in Laikipia. After Landing in Nairobi, he flew straight to Laikipia. Very little was said about his visit.

Some Chinese went to the area to prospect for minerals. They were ordered out on instructions from the USA Government.

Iron ore has been found in the area recently. But the Chinese told my friend that there may be large quantities of Uranium and other precious minerals there.

British Troops regularly come to train in Kenya. There is a designated area in Samburu for their training. It is, however, said that some White Mzungu Ranchers allow the British Troops to train in their vast plains.

When the PEV erupted in 2007-2008, the British doubled their troops in Kenya. Some Kenyan Politicians, including Marta Karua, raised the alarm. Only one Battalion was allowed to train in Kenya at any one time.

At one time, the British Troops refused the Kenyan Customs Officials to check what they were bringing into the Country. The total consignment was sent back to the UK, unopened.

Are the British trying to recolonise Kenya? What is there in Laikipia, that they hold onto, receiving huge amounts of cash from foreign Countries?

When the late Finance Minister in Kibaki’s Cabinet, Mwiraria, decided to impose taxation of the Laikipia Fraternity, the British withdrew his Visa, although he held a Diplomatic Passport. Laikipia is indeed, a “Little England”.

Subscribe to watch latests videos
In this article:British Colony, headline, Kenya and Britain