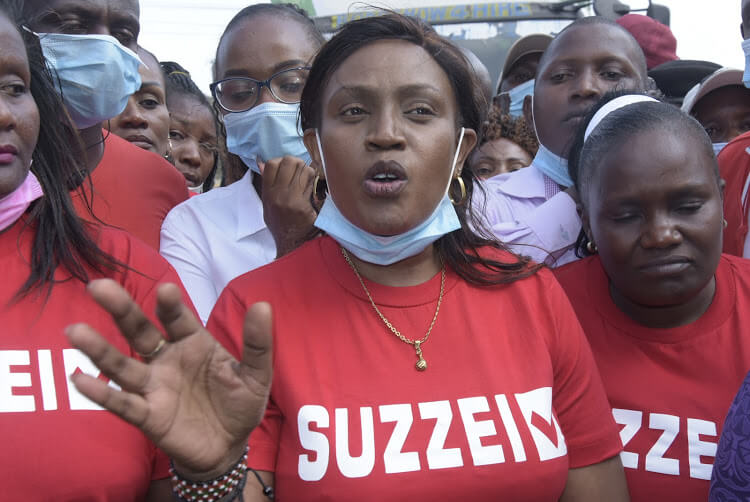 (KDRTV) – President Uhuru Kenyatta is expected to face off with his Deputy William Ruto in the Juja Parliamentary by-elections.

The race to replace former Juja MP Francis Waititu, who succumbed to cancer last month, has already narrowed down to Jubilee vs UDA or Uhuru against his deputy.

IEBC has already gazetted May 18, as the date of the elections with political parties given until March 22 to nominate their candidates.

According to reliable sources, Jubilee may settle on Waititu’s widow Susan Njeri who has already hit the ground running for campaigns.

Njeri has an upper hand as she allegedly enjoys support from Kiambu MPs. The nominations will be held on March 29.

Susan Njeri, the Late Juja MP's wife, already submitted nomination papers for Jubilee ticket. Those Bible Memory Verse Reciters have told Murathe to arrange himself as they're coming to Uhuru's bedroom to revenge for the bad things they've been shown. Pass me that popcorn bowl.

DP William Ruto’s UDA Party had given candidates until Monday this week to submit their credentials for the poll. UDA, a new kid on the block, has fielded candidates in all major by-elections since it was launched this year.

Ruto will hope to stamp his hustler politics in a region deemed as crucial to his 2022 ambitions.

However, the DP may clash with Jubilee Party mandarins who have threatened to kick him out of the party for advancing a rival political party. If Ruto campaigns for a UDA candidate, it will be the last straw for President Kenyatta, who had threatened him to resign.

Uhuru may personally campaign for Wakapee’s widow. During the MP’s burial last week, the President said they were personal friends.

The race is also a battle between Tanga Tanga MPs in Central Kenya and their pro-handshake colleagues.