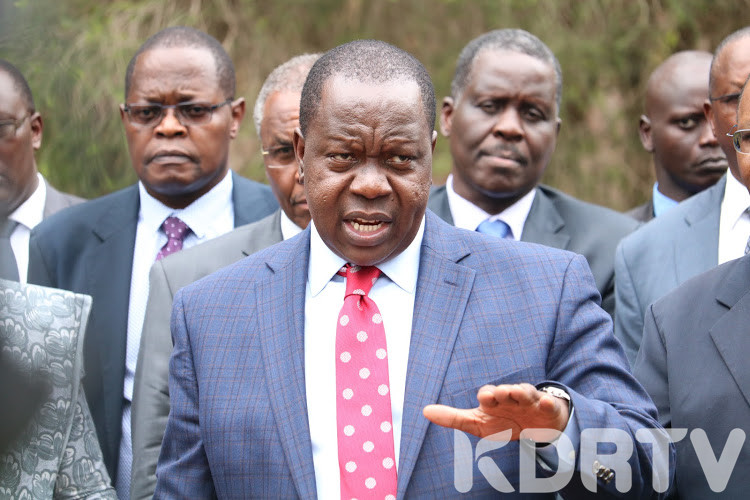 (KDRTV) – Interior CS Fred Matiangi has controversially claimed that the Hustler Narrative is a threat to national unity.

Speaking in Murang’a County on Thursday, the CS said that the government will protect this country and before, during, and after the 2022 polls.

MATIANGI TERMS Hustler Nation a threat to national security, says government will secure country before, during and after 2022 polls. pic.twitter.com/7aB0tkRkzX

He spoke afew hours after Deputy President William Ruto had addressed a funeral in Nakuru County. Ruto, without mentioning names warned the Inspector General of Police against being used by politicians.

“We expect the Inspector General of Police to provide leadership that will ensure we have a professional and independent police service that does not bend to political interests and partisan considerations,” said Ruto when he attended the funeral of the son to Bahati MP Kimani Ngunjiri in Nakuru,” the DP said at the funeral of Bahati MP Ngunjiri Kimani’s son.

Using the same warped logic @FredMatiangi an appointee of the President who sits in the same Cabinet and National Security Council with the Deputy President cannot go insulting his senior in funerals https://t.co/L8e5Qvuanu

However, Matiangi fired back at the DP, questioning why he was lecturing the IG in funerals when he had direct access to him.

“I cannot seat in the National Security Council and insult the Inspector General (of Police) in public and burial meetings. Because some people have decided to stoop too low, to a point of pettiness and desperation,” the CS fired back.

Matiangi is an impediment to the justice system in kenya.
He now has the temerity to ask courts to speed up matters, yet, he never obeys court orders or summons.
How laughable.

Matiangi is among politicians lining up to succeed President Uhuru Kenyatta in 2022. He is likely to face of with the DP.

Subscribe to watch latests videos
In this article:Headlines, Matiangi, Ruto