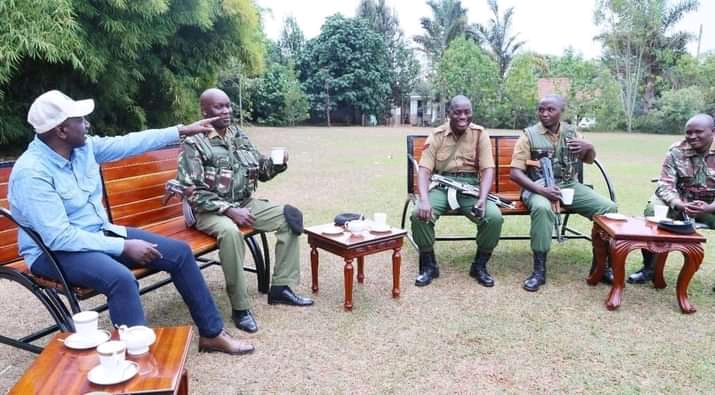 Deputy President William Ruto has been caught toungue-tied after the Interior Ministry’s Secretary Internal Security Wilson Njenga served him with a notice exposing how the Administration Police Officers manning DP Ruto’s official residence at Karen home in Nairobi are struggling to make their life ends meet following the starving mode subjected unto them.

Wilson Njenga informed that the officers have not been consistently provided with food rations to enhance optimal discharge of mandates and tasks assigned to them. It has been gainsaid that the officers are deployed at DP Ruto’s day and night and are restricted to move out to get food supplies.

“This is to bring your attention that above officers have not been consistently provided with food rations or meal allowances to enable them to discharge their mandate effectively and efficiently. They are deployed there permanently for day/night and cannot move out to get food supplies” the letter read.

This is said to be contrary to what used to happen to the General Service Unit (GSU) officers where they would be allowed to get food allowances in time and discharge their assignments effectively.

“This is in contrast to their counterparts from GSU whom they replaced and who used to get food rations” Wilson Njenga added.

However, in a joint rebuttal, Deputy President William Ruto’s Communication Secretary David Mugonyi dismissed the letter citing that the officers are sectioned under the office of the Inspector General Hillary Mutyambai and their welfares are perfectly catered for. He noted that the only bottlenecking complaint raised was the delay of disbursing the allowances.

“We have provided them with food. The only complaint I am aware of is delays to pay their allowances. The officers are under the office of Inspector General of Police. Their welfare is catered for by that office. Even the GSU were under the IG,” Mr Mugonyi addressed in a letter.