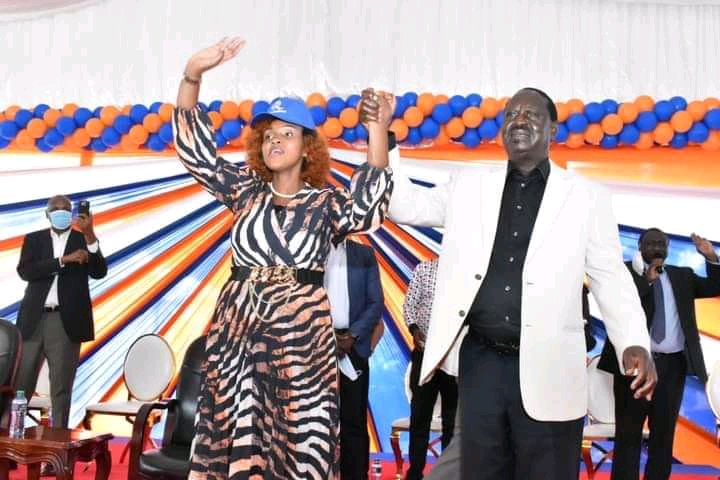 Wangui announced her official exit from The Service Party citing unpopularity of the former Agriculture Cabinet Secretary Mwangi Kiunjuri who would threaten to plunge her political career into a grave.

“Baba, when I was in the other outfit (TSP) I saw my political stamina diminishing and that is why I have decided to join the winning team (Azimio la Umoj)” Wangui stated.

Raila is currently meeting more than 1000 women drawn from all walks within Nairobi county at KICC increase the base support of Azimio la Umoja in the city.

Raila is also warming up to receive a huge boost to his Presidential ambition as the Mt Kenya Foundation elite billionaires are expected to endorse him (Raila) today at Safari Park Hotel, Nairobi.

“They (Mt Kenya Foundation) have settled on Raila Odinga. They will unveil him today at Safari Park Hotel” Maoka Maore hinted.

The Mt Kenya tycoons allied to the head of state were tasked in September 2021 to asses ODM supremo and One Kenya Alliance chief Principals and point the best candidate who would serve and protect the interests of the people of the mountain after Uhuru’s exit in 2022.

“I know you might be wondering why we are assessing you. We are looking for a candidate who will protect the interests of the people of Mt Kenya” Mt Kenya Foundation Chairman Peter Munga revealed.

This emerges a time when Raila is also set to make a public verdict at Kasarani on Friday about his decision of vying in 2022 presidential race.