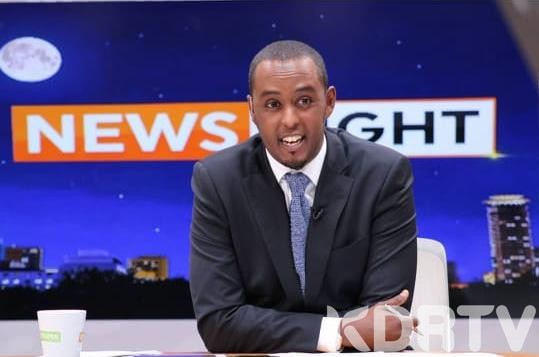 Celebrated Citizen TV Journalist Hussein Mohammed has announced that he will be quitting the station after more than 10 years at the Royal Media Services Owned Station.

Hussein announced the surprise decision through his official Twitter handle, saying that he has relished every moment at the station but he will be taking a break from the end of October to concentrate on other matters.

“It has been a wonderful 10 years at Citizen TV. I have enjoyed & relished every moment I shared with my colleagues at RMS. I have decided to take a break after October In Sha Allah to concentrate on other matters.” Reads part of the tweet seen by KDRTV.

However, the anchor did not reveal his next destination but promised his fans that they will be interacting soon.

It has been a wonderful 10 years at Citizen TV. I have enjoyed & relished every moment I shared with my colleagues at RMS. I have decided to take a break after October In Sha Allah to concentrate on other matters. Loved the fans, the critics & everything in between. See you soon.

Hussein has been one of the leading anchors at Citizen TV in the recent times and has hosted several high profile politicians including Deputy President William Ruto on his #NewsNight Show which used to air on Tuesdays.

Some of his fans praised him for his objectiveness and bravery when handling stubborn guests. He is on record as the only journalist who has ‘bullied’ Ruto with tough questions.

Your interview with @WilliamsRuto will always be remembered in this country

For close to 2 hours of Prime time tv

All the best Hussein Mohamed.

However, his star started to dwindle when Citizen TV signed Jeff Koinange who became the leading anchor with his #JKLive Show. Jeff is considered the face of RMS and hosted more high profile guests since then.

Citizen TV currently boasts of seasoned Journalists like Yvonne Okwara, Joe Ageyo and even Linus Kaikai who may replace Hussein on the News Night.

Kenyans have taken to social media to wish the journalist well in his future endeavours.

Congratulations Hussein! You are what a journalist should be. Is it Aljazeera? Or where do we wait?

We will definitely miss you, as my senior in the industry you have always inspired me. Your indeed a role model to Many of is in the profession. See you soon.

This tweet on a Friday, best day of the week is so heartbreaking. Citizen is the best place to be brother @HusseinMohamedg . All the best bro and Jumcaa Kareem.

Ohh!! My God…. honestly in @citizentvkenya no one has that charisma of interviewing this great people in the society…..@AnneKiguta left now @HusseinMohamedg living…..you made us stick by bt itz finished!!!!

You've ever been my best broadcaster, will miss you. Every Tuesday Night I usually waited to see you there with such welcoming advert………….. "Live from Citizen TV this is Tuesday Night By Hussein Mohammed"… All the best in your next move.