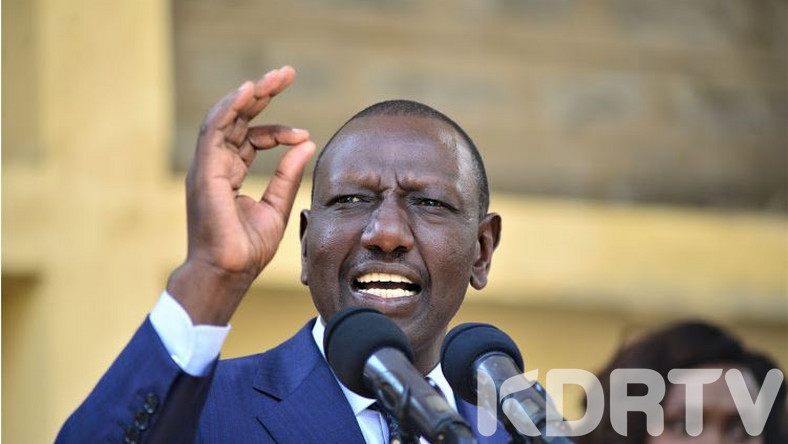 KDRTV-Deputy President William Ruto has continued with his onslaught on his political rivals whom he has continuously accused them of having a plot to frustrate and destroy his political ambitions.

Speaking during a church service at Catholic Church of Uganda Martyrs Kibirichia Parish, Buuri in Meru County on Sunday, Ruto told his critics that he is the Deputy President appointed by Kenyans and he has no apologies to make.

Ruto further warned public servants who are using their offices to threaten the leaders who are perceived to be his supporters that they will be ousted out of their offices if they don’t stop their behaviors.

” I am the Deputy President of Kenya elected by the people of Kenya and I have no apologies to make to anybody.And I want to tell those public officers that soon and very soon we will call them out,”Ruto said .

Ruto who seems to be angered by the tense political environment which has taken over the country as 2022 succession and BBI politics remain the main source of currently heated political debates.

Ruto’s office has been on the spot over several corruption scandals worth billions of money which have led to the arrests and prosecution of his key allies.Ruto and his team however believe that these are part of the schemes orchestrated to prevent him from rising to the presidency.

Defending his allies, Ruto dared his rivals to leave his supporters and face him face to face.

“They must stop the nonsense they are engaged in making telephone calls to people, to leaders blackmailing people left, right and centre.If they are men enough let them come forward and face me,” the DP dared.

Ruto’s  sentiments come barely a day after he hit the headlines during the final send off ceremony of sergeant Kipyegon Kenei who was a security personnel at his Harambee house offices.Kenei who was brutally murdered was a key suspect in the Ksh 39 billion fake firearm scandal in which Ex-Sports CS Rashid has been implicated.The deal is alleged to have been finalized at Ruto’s Annex office and that is the reason why Kenei was murdered.

During the burial ceremony, Ruto claimed that there is a class of politicians which is keen to crush his 2022 presidential bid through fake corruption scandals  and other methods aimed at destroying his public reputation.