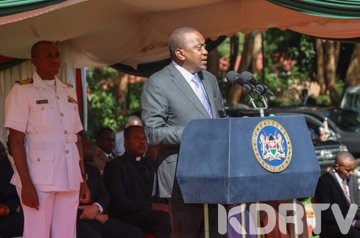 “We will come and we will talk about these things. We are getting to a point where we are saying enough is enough and we are tired,” These were the words of President Uhuru Kenyatta during a function in Gatundu on Wednesday.

Speaking in his Kikuyu dialect, a visibly angry Uhuru warned politicians opposing the BBI report that he is tired of their lectures and that a time is coming when he will give the Mt Kenya people direction on what to do with BBI.

“I am a bit angry but it is because every day when you wake up, it is just lectures.”

They think I am stupid because I am silent – President Uhuru pic.twitter.com/XIHPEOUWZd

It has since emerged that Uhuru’s rant was directed to a section of Tanga Tanga MPs who scuttled a meeting called by State House operatives at the Ole Sereni lodge on Tuesday.

According to a local daily, invites for the meeting that was disguised as a Mt Kenya Foundation were sent out to all Mt Kenya MPs by Deputy Majority Whips in both houses; Cecil Mbarire (National Assembly) and Irungu Kang’ata (Senate).

“Mheshimiwa, further to our message please note that you are invited for a breakfast meeting of all Mt Kenya MPs and Senators on Thursday 5th December 2019,” reads part of the message sent out to members on Tuesday

The meeting was meant to extensively discuss the BBI report. In fact, a team of experts had been hired for the purpose.

But sources privy to the plans say the message was not received well by Ruto allies who almost insulted the two messengers. Mbarire and Kang’ata were forced to cancel the meeting after a backlash citing further consultations as the reason.

This development angered the President and it is one of the reasons behind his rant on Wednesday. Uhuru was also not happy with the fact that 57 MPs from the region held a two-day retreat in Embu last week and later declared that they want the BBI report be implemented through parliament and not a referendum.

The President has now warned these politicians that they risk losing their seats in the next general elections.

This is just a hypothesis.

I don't think Uhuru and Ruto are enemies.

Whatever is happening between them looks like a scripted game that both of them are familiar with.

If I was a politician with an eye for 2022, I would view their "enmity" with suspicion.

I may be wrong.

“They see me silent and think ‘he is just there and knows nothing’. There is nothing I do not know and when the time comes, I know those who speak and they are not those who are speaking now,” he said.

He further reiterated that only God knows who will be the next president. This is far from his slogan in the 2017 campaigns when he asked his supporters to let him finish his 10-year term and then his deputy would take over for another 10 years.