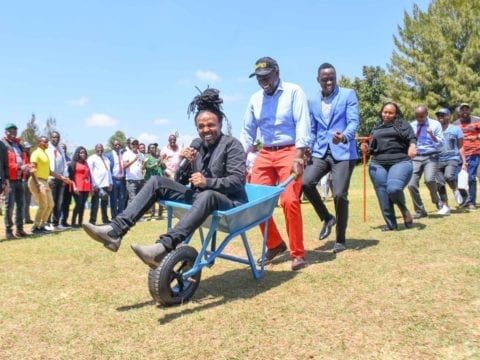 President Ruto has formed a new program that will replace Kazi Mtaani which was introduced during former President Uhuru Kenyatta’s tenure.

Speaking on Sunday, October 30 in Muranga County, the Head of State stated that the new program will save the country from harsh climate conditions which are currently being experienced in some parts of the country.

President Ruto revealed that the new plan is part of the Kenya Kwanza government’s plan to plant 5 billion trees in the next five years.

“We have decided as Government that we want to join all Kenyan citizens to plant 5 million trees in the next five years. Each one of us, the County Governments, the National Government, all the other agencies, the private sector, and all other traders shall join hands to plant trees to restore our rivers.

Ruto asked Members of parliament to amend the Constituency Development Fund (CDF) law so that they can be given more funds to facilitate the program.

“We have agreed that we shall change the law to add CDF money to help MPs offer money to mothers groups and those of youth to produce tree seedlings.” Ruto stated.

The new program comes days after he abolished Kazi Mtaani claiming that it was outdated.

“Kazi Mtaani is outdated now, the work now is building these houses, and the first people to get jobs in this project will be from Kibra,” President Ruto said on October 25.

Also Read: Police Officers Who Teargassed President Ruto in 2020 Reach Out to Gachagua, Ask to be Forgiven