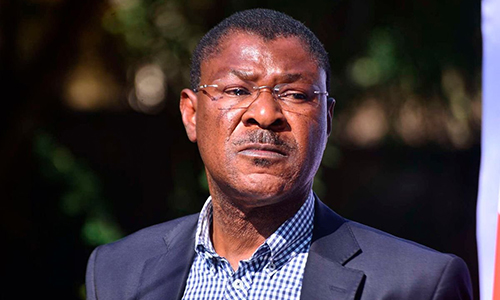 National Assembly Speaker Moses Wetangula Has ruled that the Kenya Kwanza Alliance has the majority of the members in Parliament.

Speaking on Thursday October 6 Wetangula stated that Kenya Kwanza will take the positions of Majority Leader and Chief Whip as it is a coalition with the most members.

This, by implication, indicates that the Kenya Kwanza Coalition is the Majority Party and the Azimio La Umoja One Kenya Coalition Party is the Minority Party in this House,” Wetangula stated.

Wetangula Argued that the Azimio coalition as a party did not have any elected MP but the leaders under Azimio were elected using their respective parties.

“May I report that surprisingly the Registrar of Political Parties this morning submitted to me the documents said to be the certified copies of the coalition agreements for the Kenya Kwanza Coalition and the Azimio la Umoja One Kenya Coalition Party. A perusal of the documents presented by the honourable Junet Mohammed and the Registrar of political parties reveals glaring inconsistencies in both documents.” He said.

Wetangula announced that Kikuyu Member of Parliament Kimani Ichungwa is the National Assembly Majority Leader while Ugunja MP James Opiyo Wandayi will be the Minority Leader.

Ichungwa will be deputised by his Kilifi North counterpart Owen Baya while Wandayi will be assisted by Kathiani MP Robert Mbui.

South Mugirango lawmaker Sylvanus Osoro will serve as the Majority Whip, and will be deputised by Marsabit Woman representative Naomi Waqo.

Also Read: Amount of Money &Allowances Moses Wetangula Will Get After Being Elected National Assembly Speaker