Kenya’s First Lady, Margaret Kenyatta comes from a powerful family with extensive ties to the majority of government departments.

Margaret, who garnered international recognition for her Beyond Zero Campaign, a countrywide grassroots health campaign aimed at achieving zero maternal deaths, and the First Lady Marathon, is now the leading figure in carrying on her family’s legacy.
He is married to Uhuru Kenyatta and the pair has three children: Jomo, Jaba Muhoho, and Ngina Kenyatta.

Margaret is the daughter of the late Ephantus Njuguna Gakuo, a former director of the state-owned Kenya Railways Corporation (KRC). Magdalena was her mother’s name, and she was of German ancestry.

He stayed in the position until 1976, serving for a total of 12 years. He had already lectured at a number of foreign universities.

He is widely considered as one of the key persons responsible for the transformation of Kenya’s railway network, as well as almost the entire East African region.

He acquired approximately Ksh1.8 billion from the World Bank during his tenure, which was used to support significant railway line modernization projects.

Margaret has only one older sibling, Maina Gakuo. Despite his low-key demeanor, he has been noted on a number of occasions. 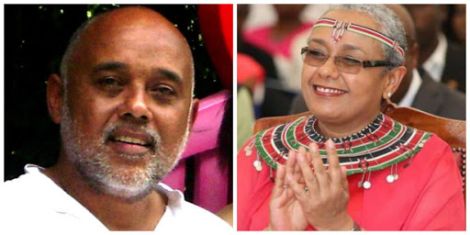 Maina and Uhuru both attended St Mary’s High School, and it was then that he met Margaret by coincidence, and their love stars began to align.

On the other side, Maina has maintained a secluded life, with little information about him made public. Margaret, on the other hand, bears an uncanny resemblance to his brother.