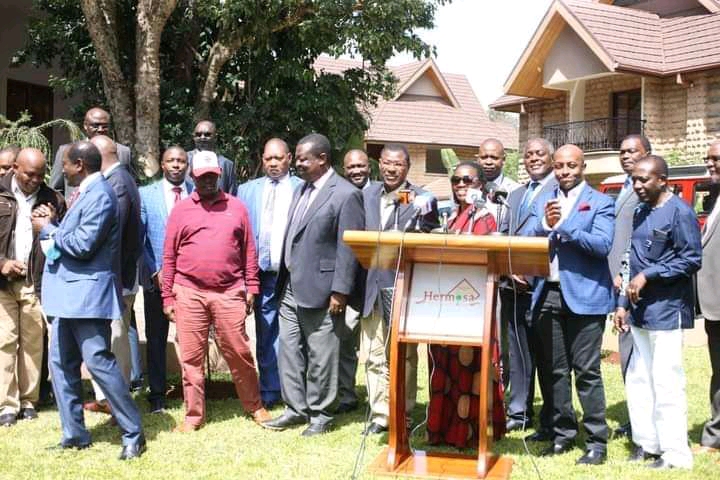 KDRTV News Nairobi-The OKA Principals comprising of Kalonzo Musyoka, Musalia Mudavadi, Gideon Moi, and Moses Wetangula, are in a four-way junction not sure to move forward, make a right turn or left turn.

From their body language and proverbial diction on their media briefings, their house is on fire.

Time is running out for the OKA Principals and they have no better option than a compromise candidate presumably from the Central Kenyan region.

A source close to the four presidential contenders has intimated to KDRTV News that every principal is reading from a different script.

Today they met the Mount Kenya leaders forum headed by Martha Karua and hinted that they might settle for a consensus candidate preferably from the Mount Kenya region in order to neutralize the Ruto and Raila candidacy which has almost sent their presidential and political ambitions to the dustbin.

Raila Odinga’s solid support from the Mount Kenya billionaire club has sent shivers down the spine not only to the OKA principals but also to the Deputy President’s camp which is running against the tide and cutting into his perceived overwhelming support he’s been commanding since his campaigns started immediately after the 2017 general elections were called.

Musalia Mudavadi, Gideon Moi and Kalonzo Musyoka camps are each demanding to be the flag bearer while Moses Wetangula has been sandwiched between the three camps and he’s playing the peacemaker in this intricate balance but he is now open to the idea of a compromise candidate because neither the camps are willing to give in and support one candidate.

READ ALSO: “I Will No Longer Respect Lusaka And Wetangula” Fires Erupts In Bungoma As Wangamati Declares War With Ford Kenya

The equation has been complicated by President Uhuru Kenyatta who has already indicated from his body language and close confidants that he is supporting Raila Odinga for the top seat.

Several meetings called by President Uhuru to implore on the OKA principals to drop their ambitions and support Raila is yet to bear fruits as the principals have vehemently rejected his proposals and have threatened to walk out of any arrangement where Raila will be declared the candidate who will face off with Ruto in the August 2022 presidential election.

Senator Gideon Moi seems to have made a decision to support Raila Odinga after listening to the counsel and requests from President Uhuru Kenyatta but he’s not come out clearly to state make his decision public and is still on the wait and see situation.

Make KDRTV your home for the latest International and Kenya News. Bookmark our site. Make sure you follow us on Facebook, Twitter, and YouTube to stay updated with the latest Kenya and International News.