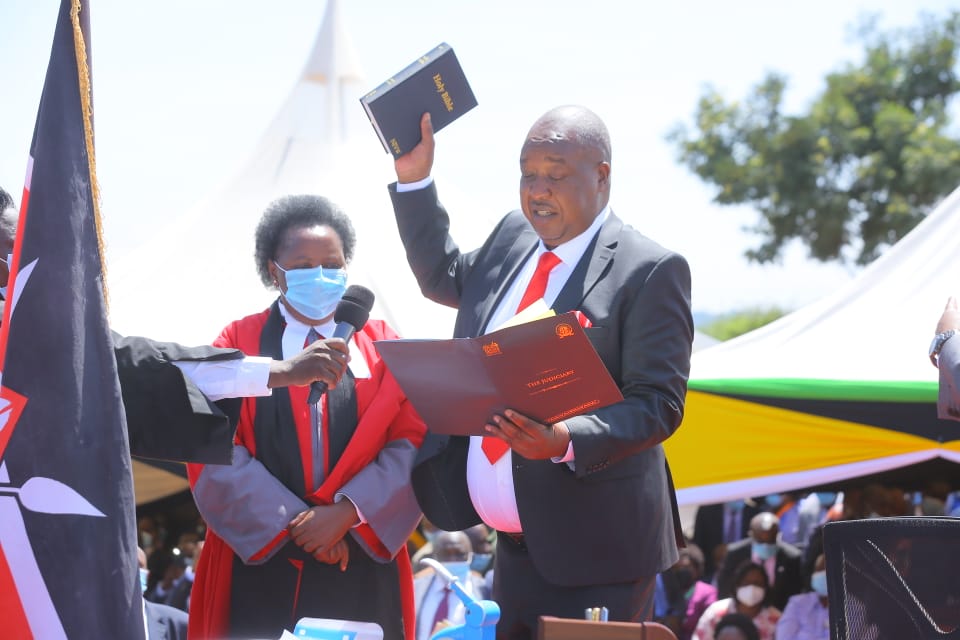 In a message to newsrooms, Nyaribo said he was exercising Article 1979(7) of the constitution which says that all Executive Members of the County cease to hold office immediately a vacancy occurs in the office of the Governor. He directed the officers to hand over their duties to the County Secretary.

“In complying with Article 179(7) of the Constitution of Kenya 2010, the former Nyamira County Executive Committee members have officially handed over their duties and responsibilities and govt stores to the County Secretary,” the Governor said in a tweet.
https://twitter.com/citizentvkenya/status/1344350954842431490
Nyaribo was sworn-in as the second Nyamira Governor on Tuesday, succeeding Nyagarama who succumbed to COVID-19 early this month.
Interestingly, most Nyamira residents have welcomed the move to sent the executives home, asking the new governor to embark on service delivery.
The purge on the senior executives was perhaps expected as all of them kept away from Nyaribo’s swearing-in ceremony at Nyamira Primary school on Tuesday. The new governor did not see eye to eye with Nyagarama and his friends in the county.
Speaker after speaker at the ceremony pleaded with Nyaribo not to revenge on those who had wronged him during his tumultuous 8-year tenure as Deputy Governor.
In his inauguration speech, the new governor promised to tackle the runaway corruption and shoddy jobs by contractors. He called on locals to report contractors who were doing shoddy work.
“We have been losing public money by paying for incomplete and ghost development projects. Corruption affects all of us. Let us not be silenced but report to the responsible agencies,” he said.

Mr Nyaribo said that the county has a bloated wage bill at 60 percent of county revenue, which is way above the required limit of 35 percent.

“This wage bill is not only irregular but also unsustainable. To address this issue, my government will take appropriate measures aimed at reducing the wage bill to the required limit as provided for in legislation,” said the new governor.

Subscribe to watch latests videos
In this article:Amos Nyaribo, Nyamira