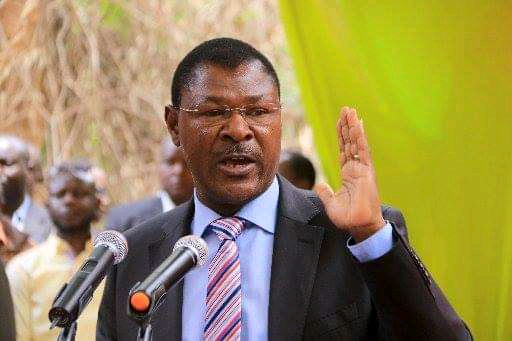 Ford Kenya National Delegates Conference which is slated tomorrow has tagged along various party stakeholders from the parliament to the executive to exhaustively end the internal wrangles within the party leadership team.

Speaking today Wednesday to the journalists, Bungoma Women Representative Hon Catherine Wambilianga who doubles as the county chairperson revealed that NDC will settle the much hyped Wetangula-Wamunyinyi push and pull game that has negatively derailed the progress of the party in the ongoing coalition negotiations with other bigwig parties.

“National Delegates Conference (NDC) committee will look into the frosty verbal brawl between Wetangula and Wamunyinyi that has taken the centre stage in Ford Kenya detailing many of the party plans including coalition talks with other parties” she said.

Tommorow’s event will also pave space for Wetangula’s opponents to join the battle of unseating him from Ford Kenya top seat. However, Wambilianga informed that it was only One Kenya Alliance (OKA) partner Moses Wetangula who had already paid Ksh1M as requisite fee putting him at the comfortable place of reclaiming his position back.

Wetangula’s insider has leaked Star newspaper that the embattled Bungoma senator might also make a landmark announcement by declaring his presidency in next year’s presidential race.

“Our party leader Moses Wetangula might also announced his 2022 presidential bid since his time to lead this country is now. That does not mean that Ford Kenya is moving out of One Kenya Alliance, no, we are still in OKA” star newspaper quoted Wetangula’s ally.

Ukweli Usemwe! OKA Has Agreed To Join ODM, Just Waiting For The Right?